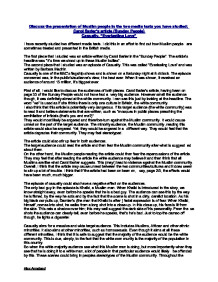 Discuss the presentation of Muslim people in the two media texts you have studied; Carol Sarler's article (Sunday People) Casualty,

Discuss the presentation of Muslim people in the two media texts you have studied; Carol Sarler's article (Sunday People) Casualty, "Everlasting Love" I have recently studied two different media texts. I did this in an effort to find out how Muslim people are sometimes treated and presented in the British media. The first piece that I studied was an article written by Carol Sarler in the "Sunday People". The article's headline was "It's time we stood up to these Muslim bullies". The second piece that I studied was an episode of Casualty. This was called "Everlasting Love" and was written by Barbara Machin. Casualty is one of the BBC's flagship shows and is shown on a Saturday night at 8 o'clock. The episode concerned was, in the public's/audience's view, the best ever. When it was shown, it received an audience of around 15 million, it's biggest ever. First of all, I would like to discuss the audiences of both pieces. Carol Sarler's article, having been on page 33 of the Sunday People would not have had a very big audience. However small the audience though, it was definitely aimed at the white community. I can see this just by looking at the headline. The word "we" is used as if she thinks there is only one culture in Britain, the white community. I also think that this article is potentially very dangerous. If its target audience (the white community) ...read more.

Although this language can potentially split the audience and make a lot of people angry, she is very successful in using it. I know this because when I first began to read the article, she had me believing that her statements and that her points were truthful. This was until I realised just how r****t this article really was. These statements would most definitely offend the minority audience, the Muslim community. They would be offended straight away, just after reading the headline! "It's time we stood up to these Muslim bullies" is bound to cause anger throughout the Muslim people straight away. But I also think that the headline is an intriguing one and so intrigues the reader to read on. This makes it a successful headline (in terms of gaining an audience). The Muslim reader, however, would not like the fact that Carol Sarler is separating them from the rest of the country in just her first sentence! S/he would most definitely be angered by what they are reading. This however is what Carol Sarler intends for in this article; an emotional response. The division in the audience is that the white community starts to separate itself from the Muslim community. The Muslim community is angered and feels discriminated against. This is the exact intention of the writer. The second technique that Carol Sarler uses is the use of assertions. Assertions are opinions given by the writer with no evidence to back them up. ...read more.

I especially did not like Carol Sarler's article. In my opinion, it is an extremely r****t and corrupt article. The techniques that she uses turn audiences against each other. Carol Sarler's article is very successful in what it aims for, to corrupt and cause a reaction, but in terms of facts, it is a very weakly written piece of work. In fact, both pieces are very weakly written in the sense that they don't use facts. Carol Sarler gives opinions and presents them as facts, i.e. when she explains that Mosques preach to Muslims and tell them to annihilate the white community. This is obviously not true, but she presents it in a way that makes the reader believe it. Casualty is also poorly written by Barbara Machin. She too cannot get her facts right about the Muslim people. The sister of the "bad-guy" in Casualty is called Lamisha. This name, as a matter of fact, is not even a Muslim name! The Muslim people in my class have never even heard the name or even associated the name with Islam. It's ironic isn't it? That this writer can write a whole story on a Muslim family's problems, but then can't even get a name correct?! I do think, overall, that these texts are very poorly and very weakly written. I think that it is quite dangerous to write about and criticise a culture when the writer doesn't even know the facts. The two pieces can create a lot of fear in the Muslim community because they both turn the majority against them. Alex Armstead ...read more.