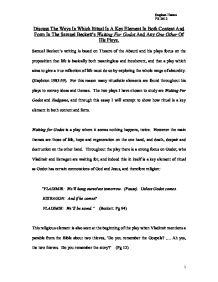 Discuss The Ways In Which Ritual Is A Key Element In Both Content And Form In The Samuel Beckett's Waiting For Godot And Any One Other Of His Plays.

Discuss The Ways In Which Ritual Is A Key Element In Both Content And Form In The Samuel Beckett's Waiting For Godot And Any One Other Of His Plays. Samuel Beckett's writing is based on Theatre of the Absurd and his plays focus on the proposition that life is basically both meaningless and incoherent, and that a play which aims to give a true reflection of life must do so by exploring the whole range of absurdity. (Stapleton 1983:59). For this reason many ritualistic elements are found throughout his plays to convey ideas and themes. The two plays I have chosen to study are Waiting For Godot and Endgame, and through this essay I will attempt to show how ritual is a key element in both content and form. Waiting for Godot is a play where it seems nothing happens, twice. However the main themes are those of life, hope and regeneration on the one hand, and death, despair and destruction on the other hand. Throughout the play there is a strong focus on Godot, who Vladimir and Estragon are waiting for, and indeed this in itself is a key element of ritual as Godot has certain connotations of God and Jesus, and therefore religion: "VLADIMIR: We'll hang ourselves tomorrow. (Pause). Unless Godot comes. ESTRAGON: And if he comes? VLADIMIR: We'll be saved." (Beckett. Pg 94) This religious element is also seen at the beginning of the play when Vladimir mentions a parable from the Bible about two thieves, 'Do you remember the Gospels? ...read more.

There is no sense of location or time, and the characters appear to be ageless, both young and old. However, if a time, location and age was given to the audience the play would lose the universality that Beckett was trying to achieve. Stripped of naturalistic detail it allows for a ritualistic presentation of the characters, where patterns of human behavior can be seen. One of the impulses to use ritual in performance is that of the extra-ordinary. The familiar becomes the unfamiliar. In Waiting For Godot the familiarity of everyday human activity and belief in God becomes unfamiliar when Godot never comes, and Vladimir and Estragon begin to realise that their lives are meaningless. One aim of Ritual Theatre is to try and find the truth of a situation and to re-assess the way in which we live. Indeed, this seems to be reflected at the end of the play when Vladimir realises that they will always be waiting for Godot because he is just a distraction from their everyday, mundane lives. Human instinct is to believe in something bigger than ourselves, and we need to put our faith in something. As humans we are always waiting for something to happen. Through Waiting For Godot, and showing ritual as a key element in his writing, Beckett shows that just as his play has no orderly time sequence or meaning, human existence is the same, but we will always create ritualistic distractions to make up for this. ...read more.

CLOV: What for? HAMM: To oil the castors. CLOV: I oiled them yesterday. HAMM: Yesterday! What does that mean? Yesterday! CLOV: (Violently). That means that b****y awful day, long ago, before this b****y awful day." (Pg 32) At one moment there is nothing really happening, and then the next moment there is a sudden explosion of anger. The emotion of anger and aggression is evident from the language used, but the use of repetition amplifies the emotion even more. The instability in the moods of the characters exaggerates the feeling of moving from complete despair to animosity. In conclusion, I feel Waiting for Godot and Endgame are very stylised forms of writing as they are both deviations from naturalism. Both plays have patterns running throughout and the dynamics focus on life rhythms. In Waiting For Godot repetition is mainly used to show human nature, and how we will create distractions to divert us from our daily lives; whereas the repetition in Endgame is used to show the idea of death and human life. Beckett uses key elements of ritual such as repetition and circular plots to create an appearance of powerful rhythmic cycles that highlights time, and in short, portrays a realistic insight into the lives we lead as human beings. BILBLIOGRAPHY Atkinson, Brooks, Beckett's Endgame. (NYTimes.com Wireless Services) Beckett, Samuel, Waiting for Godot. (London: Faber and Faber. 1965) Beckett, Samuel, Endgame. (London: Faber and Faber. 1964) Kalb, Jonathan, Beckett In performance. (Cambridge: University Press. 1991) Sinclair, Michael, Essay on Waiting for Godot. (http://redrival.com/colbourne/godot.txt) Stapleton, Michael, The Cambridge Guide to English Literature. (Somerset: Book Club Associates. 1983) Ritual Theatre Course Booklet Stephen Hanna PR 2012 1 ...read more.