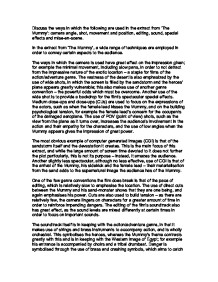 Discuss the ways in which the following are used in the extract from 'The Mummy': camera angle, shot, movement and position, editing, sound, special effects and mise-en-scene.

Discuss the ways in which the following are used in the extract from 'The Mummy': camera angle, shot, movement and position, editing, sound, special effects and mise-en-scene. In the extract from 'The Mummy', a wide range of techniques are employed in order to convey certain aspects to the audience. The ways in which the camera is used have great effect on the impression given; for example the minimal movement, including slow pans, in order to not detract from the impressive nature of the exotic location - a staple for films of the action/adventure genre. The vastness of the desert is also emphasized by the use of wide shots, in which the screen is filled by the sandstorm and the heroes' plane appears greatly vulnerable; this also makes use of another genre convention - the powerful odds which must be overcome. Another use of the wide shot is to provide a backdrop for the film's spectacular special effects. ...read more.

One of the few genre conventions the film does break is that of the pace of editing, which is relatively slow to emphasise the location. The use of direct cuts between the Mummy and his sand-monster shows that they are one being, and again emphasises his power. Cuts are also used to build tension - as there are relatively few, the camera lingers on characters for a greater amount of time in order to reinforce impending dangers. The editing of the film's soundtrack also has great effect, as the sound levels are mixed differently at certain times in order to focus on important sounds. The soundtrack itself is in keeping with the action/adventure genre, in that it makes use of strings and brass instruments to accompany action, and is wholly orchestral. This symbolises the heroes, whereas the Mummy's theme contrasts greatly with this and is in keeping with the Western image of Egypt; for example his entrance is accompanied by choirs and a tribal drumbeat. ...read more.

The mise-en-scene, while important in most films, is particularly important in 'The Mummy', for example the location which appears inhospitable to the Western audience, and so creates the image of overwhelming odds and the feeling that the heroes are out of place. The costumes worn are in keeping with the period in which the film is set (1930's), and the female lead appears to be wearing a nightdress, which emphasises her status as a 'damsel in distress.' In contrast, the Mummy is dressed in keeping with the Westerner's stereotypical image of Egypt - rags, medallions and talismans; the difference in costume between the Mummy and his sidekick and the foreigners greatens the differences between the two parties. The main focus of this extract is the special effects and spectacular location, and all the devices employed here add to these, rather than detract or distract from them. The film also appears rather 'tongue-in-cheek', perfectly aware that is playing to both genre conventions and conventional views of the foreign 'other.' ...read more.