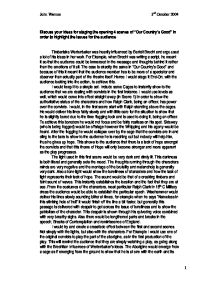 Discuss your ideas for staging the opening 4 scenes of &quot;Our Country's Good&quot; in order to highlight the issues for the audience

Discuss your ideas for staging the opening 4 scenes of "Our Country's Good" in order to highlight the issues for the audience Timberlake Wertenbaker was heavily influenced by Bertolt Brecht and ergo used a lot of his ideas in her work. For Example, when Brecht was writing a script, he meant it so that the audience could be immersed in the message and thoughts behind it rather than the emotions of it all. The case is exactly the same in "Our Country's Good" and because of this it meant that the audience member has to be more of a spectator and observer than actually part of the theatre itself. Hence I would stage it End-On, with the audience looking into the action, to achieve this. I would keep it to a simple set. Include some Cages to instantly show to the audience that we are dealing with convicts in the first instance. I would use levels as well, which would come into effect straight away (in Scene 1) in order to show the authoritative status of the characters and how Ralph Clark, being an officer, has power over the convicts. I would, in the first scene start with Ralph standing above the cages. He would deliver his lines fairly slowly and with little care for the situation to show that he is slightly bored due to the time flogging took and is used to doing it, being an officer. To achieve this boredom he would not focus and be fairly restless on his spot. ...read more.

After this scene the aborigine will be startled by the sound of a loud shot as the hunters get into motion from being previously upstage in darkness with the Aborigine watching over them. The Aborigine would move to the side for now and observe the situation but the officers will completely ignore his presence and stroll on completely self-involved. The shot, and the presence of a Gun held by a character (Harry Brewer- being the lowest of rank). The characters would be in a fairly informal ring. They start off talking about hanging as if it was of no big significance to them. Their movements and line delivery should initially show this. I think Philip may be a bit reserved because his ideas are more about rehabilitation than punishment. If he holds his shoulders in and keeps a very tight stance constantly changing his focus as though he was unhappy about the ideas the other officers were throwing around. Their costumes would all be highly decorative in the 18th C officer fashion but considering their circumstances they would be in a poor state. This will let the audience know that everybody was struggling in Australia, and not just the convicts. This is also highlighted in the line "only the 3 who stole from the stores [will be hung]" Showing that the worst punishable crime is stealing from the colony's stores because of the short supply of food. This is an issue that the audience need to realise to understand some of the drastic action taken against those who steal from the stores later in the play. ...read more.

he would walk over and take a seat by his desk...breathing deeply showing a hint of sadism in his lusts, speaking about the flogging of a girl. Harry would stride in quickly and look over, there would be an awkward tension between the two, Ralph acting like he's being accused of something when he quickly interrupts "I was writing in my journal," Ralph would be very alert and tense not to let Harry know why he's awake because of his thoughts. When Harry says, "Haven't you ever been tempted?" Ralph's reaction would be very stern and abrupt as thought he's never even contemplated the idea, where as in fact the audience knows he had s****l desire before Harry came onto the stage. He says the abrupt line with a still body and a fixed stare. He follows this saying He'd never been noticed, which shows the audience Ralph's desire for promotion. I would say this in a sorrowful way, looking towards the floor then back up towards Harry while closing his body in. This is the one of the first parts where the idea of a play is mentioned in Our Country's Good. Ralph sees it as his chance for promotion and the audience need to realise this about the play. Therefore at the end of the scene, he would not seem to be listening to Harry, but extenuate and hold the thought on the last line about the play, which would immediately show the audience this play, is a central part of OCG. John Warnes 3rd October 2004 1 ...read more.