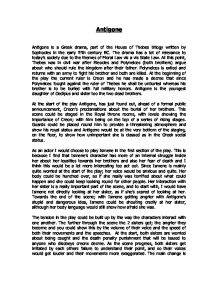 Antigone is a Greek drama, part of the House of Thebes trilogy written by Sophocles in the early fifth century BC. The drama has a lot of relevance to today’s society due to the themes of Moral Law vis a vis State Law. At this point, Thebes was in civil war after Eteocles and Polyneices (both brothers) argue about who should rule the kingdom after their father. Polyneices is exiled and returns with an army to fight his brother and both are killed. At the beginning of the play the current ruler is Creon and he has made a decree that since Polyneices fought against the ruler of Thebes he shall be unburied whereas his brother is to be buried with full military honors. Antigone is the youngest daughter of Oedipus and sister too the two dead brothers.

At the start of the play Antigone, has just found out, ahead of a formal public announcement, Creon’s proclamations about the burial of her brothers. This scene could be staged in the Royal throne rooms, with levels showing the importance of Creon; with him being on the top of a series of rising stages. Guards could be placed round him to provide a threatening atmosphere and show his royal status and Antigone would be at the very bottom of the staging, on the floor, to show how unimportant she is classed as in the Greek social status.

As an actor I would choose to play Ismene in the first section of the play. This is because I find that Ismene’s character has more of an internal struggle inside her about her loyalties towards her brothers and also her fear of death and I think this would be a lot more interesting too act out. Since Ismene is mainly quite worried at the start of the play; her voice would be anxious and quite. Her body could be hunched over, as if she really was terrified about what could happen and she could keep looking round for other people. Her interaction with her sister is a really important part of the scene, and to start with, I would have Ismene not directly looking at her sister, as if she’s scared of looking at her. Towards the end of the scene; with Ismene getting angrier with Antigone’s stupid and dangerous idea, Ismene could be shouting crazily at her sister, although her body language would still show how afraid she was.

The tension in the play could be built up by the way the characters interact with one another. The further through the scene the 2 sisters get; the angrier they become and you could show this by the volume of their voice and the speed of both their movements and the speeches.  At the start, both sisters are worried about being caught and the death penalty punishment that will be issued to anyone who disobeys creons decree. As the scene progress, both sisters get irritated by each others failure to understand their point, and so their voices would get louder and their movements more exaggerated. The main change is during Antigone’s speech that starts with “Well, What do you think, Ismene?” and finishes “Of the honor of being Oedipus’s daughter”. During this speech, which is over 30 lines long, Ismene would suddenly start to rely what it is that her sister has planned and relies how much danger they are in. Ismene’s next line “Wait a minute Antigone, don’t be so headstrong” would be quite but fastley spoken. The ensuing argument would get louder and louder until Ismene shouts “You must be mad!” This section is called the Stichomythic Exchange.

Ismene’s next speech; about the punishment her father received would be shouted too show her anger towards her sister and her total despair. She goes on to state that women cannot fight against the “institutionalized strength of the male sex” and that she has “no choice!” She finishes her rant telling Antigone “Heroic refusals are reserved for madmen!” After this Ismene calms herself down and stops shouting, with this being the loudest her character gets. However Antigone continues to shout infuriated that her sister will not help. After Ismene says she will “keep our meeting safe”, Antigone goes mad and shouts “Don’t you dare! You must tell everybody, shout it in the streets. If you keep it secret, I shall begin to hate you.”  I think that this would be a good time to use levels in the play, because I would stage it with Antigone high up on staging, shouting down to Ismene as if she was shouting down the news of her brother’s burial despite the decree. I also think that Antigone could wave her arms around, even to the point of being over the top; to maybe suggest to the audience that she’s going mad.

Ismene then starts to get angry again, and her volume increases for the line “This obsession will destroy you”. After that I would have Ismene becoming upset and dejected, as if she knows that her sister will disobey both her and the decree and risk her life in doing so. Antigone continues to shout her last part, telling her sister too “be quite” and that “you can go now. Go!” Ismene voice could then falter, as if she’s trying to fight back tears, before saying “Antigone, its madness… Remember, I Love you… whatever happens”

When Ismene and Antigone leave the stage in opposite directions, I would also get Ismene to walk off slowly, maybe grasping her head in grief and despair, and to take one last look at her sister before leaving the stage. In contrast, Antigone could run off the stage fast as if she can’t wait to defy Creon and her sister.

Because Greek Drama was played by an all male cast, I would continue to do that for the main characters, to keep some of the authenticity for the audience and to remind them what era this was written in and how much more superior men were classed as in those times; as even stated in the play. However although actors wore masks in Greek theatre, I would not use them because theatres nowadays are nowhere near as big as those of ancient Greece, and I think that the audience would understand the story better if they could see real expressions.

Costume also used to play a huge part in Greek theatre since it allowed performers to be seen from far away. This is less necessary nowadays so although I would keep some of the bright colors for the main characters, most of the over the top costumes could be disposed off.