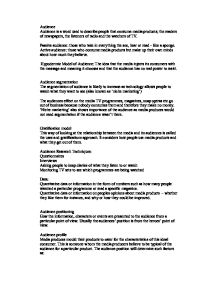 Audience Audience is a word used to describe people that consume media products; the readers of newspapers, the listeners of radio and the watchers of TV. Passive audience: those who take in everything the see, hear or read - like a sponge. Active audience: those who consume media products but make up their own minds about how much they believe. Hypodermic Model of Audience: The idea that the media injects its consumers with the message and meaning it chooses and that the audience has no real power to resist. Audience segmentation The segmentation of audience is likely to increase as technology allows people to watch what they want to see (also known as 'niche marketing') ...read more.

Quantitative data or information on peoples opinions about media products - whether they like them for instance, and why or how they could be improved. Audience positioning How the information, characters or events are presented to the audience from a particular point of view. Usually the audiences' position is from the heroes' point of view. Audience profile Media produces mould their products to cater for the characteristics of this ideal consumer. This is someone whom the media producers believe to be typical of the audience for a particular product. The audience position will determine such factors as: The type of language used The tone of voice used The subjects covered Over the years media consumptions by audience has changed dramatically and will continue to change. ...read more.

The Bill Casualty Slap None None None Hit/punch/kick None 5 None Pushed 1 5 None r**e/s******y Abused None None None Other None 1 1 Why different emotions are between boys and girls? Most violent: Cartoons we can distinguish between real life and something that is unreal and highly unlikely to happen. Wildlife: We know the difference between the way animals and people behave. Most realistic: Medical hospital Soap operas Different emotions Girls felt a lot of different emotions about TV programmes because they watch a Soap Opera and get to know characters as if they really existed and feel as though they are real. The range of emotions show by girls when violence was shown were: Anger Upset Shock Disgust Sympathy Humour Boys feel a lesser range of emotions as they don't really get into the soap opera as much as girl. ...read more.