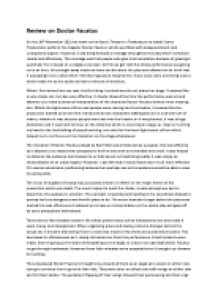 ﻿Review on Doctor Faustus On the 14th November 2012 we went to the Rose?s Theatre in Tewkesbury to watch Scene Productions perform the tragedy ?Doctor Faustus? which was filled with disappointment and unexpected aspects. However, it did bring forward a message throughout the play which is showed clearly and effectively. This message was that people who give into temptation because of greed get punished; this is based on a religious concept. At first we got told the whole performance was going to be an hour, this straight away made me have doubts about the play and allowed me to think that it was going to be rushed which I felt like happened. Despite this, there were some promising scenes which made me as the audience have a mixture of emotions. When I first arrived into my seat, the first thing I noticed was the set placed on stage. It seemed like a very simple set, but also very effective. ...read more.

The constant screaming and howling in the soundtrack helped to portray h**l as a dangerous and horrific place to be. The music started to begin before the play even started this was effective as it allowed us to have an interpretation on the whole play and gave off an eerie atmosphere beforehand. There were a few mistakes made in the whole performance which disheartened me and made it seem messy and disorganised. When organising props and having costume changes behind the actual set, it became distracting if ever a noise was made or the sheet was accidently knocked. This decreases its effectiveness as it clearly distracted me from the performance. Small incidents were made, from tripping up the stairs whilst getting on the stage, to a door not opening fully for Faustus to get through backwards. However these little mistakes were acceptable but it brought up climaxes for nothing. They developed Doctor Faustus?s thoughts by presented them as an angel and a devil on either side trying to convince him to go onto their side. ...read more.

He then finds himself getting dragged into the murky mist of h**l. The low budget performance consisted of a mass of creativity, as the set didn?t change throughout the whole thing. There were small candles used to illuminate the stage and set which cleverly symbolized the heat that burns in life and death. The Candles also represented beauty which is highly ironic, as h**l is an evil and sinister place, and is nowhere near beautiful. In conclusion, I felt that the narrative was creative but the way they presented it was filled with disappointment, perhaps without the humour it would be classed as a dramatic play which is what it is originally supposed to be. I myself would not go see it again as it did not appeal to me whatsoever; it got exhibited as a pantomime and made me feel like a child. Though I would recommend this production to the older generation as it is filled with complexities and enigmas, though it would also engage children as they get attracted the humour. ...read more.