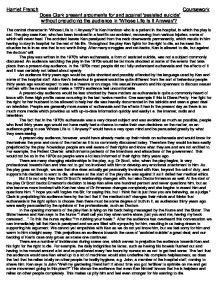 Does Clark present arguments for and against 'assisted suicide' without prejudicing the audience in 'Whose Life Is It Anyway'?

Harriet French Coursework Does Clark present arguments for and against `assisted suicide' without prejudicing the audience in `Whose Life Is It Anyway'? The central character in `Whose Life Is It Anyway?' is Ken Harrison who is a patient in the hospital, in which the play is set. The play sees Ken, who has been involved in a horrific car accident, recovering from various injuries, some of which will never heal. The accident leaves Ken paralysed from the neck downwards permanently, which results in him having to stay in hospital for the rest of his life. Throughout the play Ken fights for the right to die, as he sees the situation he is in as one that is not worth living. After many struggles and set-backs, Ken is allowed to die, but against the doctors' will. The play was written in the 1970's when euthanasia, a form of assisted suicide, was not a subject commonly discussed. An audience watching the play in the 1970s would be far more shocked at some of the events that take place than a present-day audience. In the 1970s most people did not fully understand euthanasia and the effects of it and it was certainly not talked about openly. An audience thirty years ago would be quite shocked and possibly offended by the language used by Ken and some of the hospital staff. Also Ken's behaviour in general would be quite different from the sort of behaviour people thirty years ago would expect to see in a theatre or on stage. His s****l innuendo and his openness to discuss s****l matters with the nurses would make a 1970's audience feel uncomfortable. A present-day audience would be less shocked by these matters as euthanasia is quite a commonly heard of issue with three high profile cases occurring in the last twelve months. One example if this is Diane Pretty. Her fight for the right for her husband to be allowed to help her die was heavily documented in the tabloids and seen a great deal on television. ...read more.

"And.....do me a favour, will you? Try and find an old codger like me, who believes in something better than suicide." Emerson is not giving Ken a fair `trial' and not giving him a chance to prove his sanity. He is putting Ken in a `catch-twenty-two' situation where he cannot win no matter how hard he tries. This shows how sneaky Emerson is and just how far he will go to get his own way. The audience will not like Emerson's attitude at this point and will be on Ken's side. Emerson is also a dedicated doctor who works hard for his job and is always aiming to improve the state of his work place. We can tell this through a conversation between him and Dr Scott. When Dr Emerson tells Dr Scott he has a committee meeting to go to she says "I thought you hated those." He replies, "I do, but there's a new heart monitoring unit I want...very much indeed." This shows Emerson is willing to do things that he doesn't like in order to improve the hospital and also cares a lot about the patients. His kindness is shown once again at the end of the play, after Ken has been allowed the right to die. Emerson asks Ken where he will go in his last few days and when Ken tells him he plans to get a room somewhere Emerson says "There's no need. We'll stop treatment, remove the drips. Stop feeding if you like." Here Emerson is showing Ken his kind side, and, although Emerson is still holding on to hopes that Ken will change his mind, he wants Ken to be in a familiar environment, with people he knows for his last few days. Emerson is what is called a `functional character'. Clark is again prejudicing his audience not only through what we see but now by whom we see and the way the people we see act. ...read more.

"Christ Almighty, you're doing it again. Listen to yourself, woman!" Ken may go down in the audience's opinion because of his swearing, they may think less of him because he can find no other way of expressing his feelings, or releasing his frustration. Ken can also be inconsiderate to other people's feelings at times, as is shown when he makes reference to his fianc�e. When asked if he had any family who came to see him he casually replies "A fianc�e actually. I asked her not to visit me anymore. About a fortnight ago." This doesn't sound like Ken has given much consideration for his fianc�e and makes him some across as uncaring and selfish. He also has a nasty habit of letting his bitterness get the better of him and taking it out on innocent people, such as Nurse Sadler. "Because in an hour's time you'll be bringing around a little white pill that is designed to insert rose coloured filters behind my eyes. It will calm me and soothe me and make me forget for a while that you have a lovely body." Ken's sarcasm can have a horrible affect on people that have done absolutely nothing to Ken, such as Nurse Sadler, and Ken's incapability to control his outbursts make people resent him. Another example of Ken's bitterness getting the better of him is during an incident with Dr Scott, whereupon he remarks on her b*****s. "You have lovely b*****s" Here Ken is being bitter about his situation and is trying to make Scott feel bad and embarrass her. "I watch you walking in the room, bending over me, tucking in your sweater. It's surprising how relaxed a woman can become when she is not in the presence of a man." This is unfair of Ken and he is being very nasty towards Dr Scott when she has done nothing to provoke him. This also is an example of Ken's s****l innuendo. His openness to discuss s****l matters so freely may also offend a 1970's audience, as s****l matters were not so openly discussed thirty years ago. ...read more.