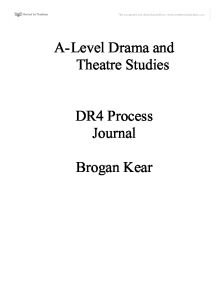 A- Level Drama and Theatre Studies DR4 Process Journal Brogan Kear Rationale One of our performance requirements is a pre-1900 piece. Whilst discussing the idea of performing an extract in a style which could not be considered modern, the obvious choice which occurred to us was to perform a play by Shakespeare. His plays are among the most widelt celebrated of all playwrights, and the diversity within them allowed us plenty of scope. I suggested that one of his history plays would be effective in portraying a method of acting, and of characterisation, which would require us to think outside of conventional modern plots. Conveying historical facts in an entertaining way appealed to me. Having read Henry IV recently, I thought it a humorous and varied text, however was aware of the lack of female roles. Upon consideration, myself and Ruth agreed that it would challenge, and almost parody, conventions of Shakespearean theatre to have two females perform male roles, since in Elizabethan theatre it was compulsory for female roles to be played by men. The scenes we chose displayed typically male characteristics such as speaking crudely of women, drinking ale and boasting of our actions, which we decided would allow scope for humour as we exaggerated male stereotypes. I performed extracts of the play "Whale Music" several years ago, and remembered it having strong female characters. It is also an evidently naturalistic and modern play, in contrast to Henry IV. Bearing in mind our chosen theme of "take away the mask and the truth is revealed", we searched the play for scenes in which emotions are disguised. We found the first scene effective as Caroline refuses to fully open up to Kate about why she is uncomfortable at the thought of them being alone together in the back of the van. The second scene we chose fits the "taking away of the mask" perfectly, as Caroline's monologue pours out every emotion, thought and secret she has kept to herself for so long and finally finds the moment to tell Kate everything she needs to hear. ...read more.

We advised each other on meanings of lines and how we saw one another's characters, and the mixture of opinions created more fully-formed characters after combining ideas from both of us. While rehearsing the second scene, we discovered the humour of Falstaff's gradual elaboration of his false tale. However, as Hal is merely humouring Falstaff by pretending at first to believe his heroic tale, we thought it best that Falstaff be fully drunk and Hal be only slightly tipsy, so as to create a tavern atmosphere and the type of scene in which two men would boast of their deeds, without resorting to overly drunken performance which we felt would distract from the underlying secrecy of Hal and naivety of Falstaff. We did attempt to act the scene whilst acting completely drunk, shouting in one another's faces and mixing up words, but I believe that it left the scene degraded to nothing more than senseless gibberish. However, we agreed that the ignorance of personal space added to the sense of intoxication, and so continued to speak closely into one another's faces, but lowered the volume from the previous bellowing, and kept slurring to a minimum for practicality of articulation and the audience's understanding. We decided to stage our scene in a proscenium arch style. As our rehearsal progressed, I found it most effective to speak while facing directly out towards the audience wherever possible, to mimic the overdramatic and flamboyant tendencies of Shakespearean theatre. When we first started rehearsing 'Whale Music', our lack of movement meant that our performance felt very wooden. Therefore a key part of our development was to apply as much emotion to our lines as we could, without exaggerating. We rehearsed the first scene with Caroline sat down, but changed this to her standing up as I thought that Kate's (my) awkward body language would be more defined, as Kate approaches Caroline and kisses her. ...read more.

The bawdy music at the beginning of the scenes was highly effective and made our performance very upbeat. Unfortunately, there was a moment during our performance at which I forgot my lines, however I think that I covered this well by remaining completely in character and using one of the props, a cup, to mime taking a drink while I worked out how to get back into the flow. Ruth helped by also staying in character and prompting me, and I was later informed that the memory lapse had gone unnoticed by the audience, so I am confident that we performed well. Evaluation. In the early stages of our planning, I was concerned that development got off to a slow start due to our indecision on which theme to choose. However, I feel that we chose the correct theme as it is a thought-provoking statement which led to fascinating discussions about possible symbolism and its relevance in our own lives. It also allowed us to explore in depth the concepts of subtext and hidden emotions in characters, as the people we portrayed often say one thing and mean another, or are living lives of secrecy and denial. Being able to portray a character with more happening under the surface than they convey directly to an audience was a challenge, but it led to detailed exploration of body language and vocal tones. In conclusion, I feel that all of our intentions in our characterisation and expression were fulfilled to a high standard. Having read the day before the exam that Anthony Minghella, the writer of "Whale Music", had passed away, we hoped that our performance would do his writing justice! I believe that our chosen theme, "take away the mask and the truth is revealed" was evident in all of our chosen pieces, and I believe that we conveyed this theme effectively, particularly in our devised piece. While I have a few small criticisms of our performance, overall I am very pleased with the outcome of our performance, and believe that our dedication and teamwork over the past few months has truly paid off. ...read more.