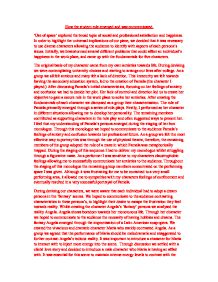 How the student role emerged and was communicated. 'Use of space' explored the broad topic of social and professional satisfaction and happiness. In order to highlight the universal implications of our piece, we decided that it was necessary to use diverse characters allowing the audience to identify with aspects of each persona's issues. Initially, we brainstormed several different problems that could affect an individual's happiness in the work place, and came up with the fundamentals for five characters. The original basis of my character came from my own anxieties towards life. During devising we were contemplating university choices and starting to arrange our lives after college. As a group we all felt anxious and many felt a lack of direction. This insecurity we felt towards leaving the secondary education system, led to the creation of Pamela (the character I played.) After discussing Pamela's initial characteristics, focusing on her feelings of anxiety and confusion we had to decide her plot. Her lack of control and direction led us to create her objective to gain a secure role in the work place to solve her anxieties. After creating the fundamentals of each character we discussed as a group their characterisation. The role of Pamela primarily emerged through a series of role-plays. Firstly, I performed as her character in different situations allowing me to develop her personality. The remaining members contributed as supporting characters in the role play and often suggested ways to present her. I feel that my understanding of Pamela's persona emerged during the staging of her box monologue. Through this monologue we hoped to communicate to the audience Pamela's feelings of anxiety and confusion towards her professional future. As a group we felt the most effective way to portray this was through the use of physical theatre, therefore, the remaining members of the group adopted the role of a maze in which Pamela was metaphorically trapped. ...read more.

For example during my characters monologue the volume levels of my voice were used to create intensity building up to a climax. The silence during my characters gestus freeze frame is poignant because when the sound is taken away the audience begins to focus more on the movement and the emotion of the character, the silence intrigued them. There are many different characters and settings in our play; therefore we decided that our set should remain very neutral. We designed our set in a deliberately ambiguous way, so we could move easily between fantasy and office scenes. We decided that altering the layout of the stage and the set between each scene would prove noisy and would distract the audience's attention. We were however very aware that a permanent set would become boring and the audience would lose interest, nevertheless we decided through rehearsals and a practice production that the intensity of the action made up for the lack of set changes. We used two black oblong boxes as the fundamentals of each scene, occasionally changing the positioning of them to create a different atmosphere. We chose not to have a specific setting contributing to the representation of free-flowing images within the characters mind. However, we decided to introduce an element of decaying society preoccupied by work ambitions and promotions through the use of broken computer monitors, keyboards, mice, and disks positioned around the stage. This gave the stage an overall look of disarray and immediately introduced the audience to the conflict within the characters in the production. How research material was gathered and used within the process. - Vicki Marks To begin the devising process our group was presented with five quotes that took inspiration from different aspects of life, this supplied us with an excellent starting point for developing a challenging piece of theatre, however our initial responses to the stimuli shaped our early work and many aspects were later changed as the piece matured. ...read more.

We took a large amount of inspiration from the melodramatic acting techniques employed by soup opera's. We particularly focused on the style of acting used in traditional Novella's or Latin American soups. Whilst approaching this style we researched the soup opera 'Days of our lives.' To help us adopt similar persona's. How the stimulus material was developed through the drama process. To begin the devising process our group was presented with five quotes that took inspiration from different aspects of life, this supplied us with an excellent starting point for developing a challenging piece of theatre, however our initial responses to the stimuli shaped our early work and many aspects were later changed as the piece matured. Firstly each member of the group decided separately which quote inspired them and worked towards abstractly analyse the meaning of these quotes. As a group we were drawn towards the quote "fear is a dark room where negatives are developed." We felt that this quote gave us enough scope to produce a brainstorm surrounding the analysis of it. After analysing the quote through a brainstorm we decided to focus on the idea of fear. These fear aspects of the quote lead our group to research and gain an interest surrounding common phobias. As an initial response to phobia we decided to explore phobias that restrain and dominate everyday life. As a group we were interested in the psychological effects of irrational fears, through discussion, we realised one of our member's arachnophobia and decided to research real life stories showing the influences of phobias. We began to gain an understanding of the psychological effects of living with an irrational fear, this allowed us to contemplate the way a person living with a phobia views the world. This inspired us to contemplate feelings and emotions surrounding living in a different mindset to the norm. We therefore decided to create five different freeze frames, abstractly exploring the physicality of emotions. ...read more.