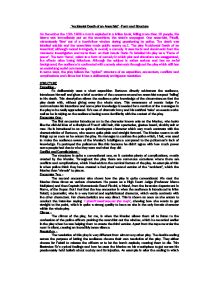 'Accidental Death of an Anarchist' - Form and Structure On December the 12th 1969 a b**b exploded in a Milan bank, killing more than 16 people, the blame was immediately put on the anarchists, the state's scapegoat. One anarchist, Pinelli, miraculously 'flew' out of a fourth-floor window during questioning by police. The death was labelled suicide and the anarchists made public enemy no.1. The play 'Accidental Death of an Anarchist', although rooted in tragedy, is overall, a comedy. It uses facts and documents from the massacre investigation and turns them on their heads. Dario Fo labelled his play as a 'Farce of power'. The term 'farce', refers to a form of comedy in which plot and situations are exaggerated, the effects often being ridiculous. Although the subject is rather serious and has an awful background, the audience is confronted with comedy elements throughout the play which still has an underlying social commentary. In some ways, the play follows the "typical" structure of an exposition, encounters, conflicts and complications and climax but it has a deliberately ambiguous resolution. STRUCTURE Exposition - Fo deliberately uses a short exposition. Bertozzo directly addresses the audience, introduces himself and gives a brief overview of the concerns around an anarchist suspect 'falling' to his death. ...read more.

Her characteristics are very direct. This is shown as soon as she enters to conduct the interview saying 'I shan't beat around the bush', showing how she wants to get straight to the point, which is quite a strong quality to have as she is the only female character within the whole play. Climax - The climax of the play, for me, is when the Maniac allows them all to listen to the confession of the police officers pushing the anarchist out the window, which he recorded earlier in the play when he was helping them to create the third version. Apart from the tape recorder the room is silent, causing an incredibly tense silence. Resolution - The resolution of this play is very different from almost any other play. The double ending serves the purpose of letting the audience choose their own resolution of the play. They either choose for Feletti to release the officers or to let the b**b explode, causing them to die. This illustrates Fo's cynical feelings and how he uses the Maniac as his mouthpiece to get across his passionately held beliefs about society and its injustice. An example is after the ending in which the police are killed, when the Maniac justifies the double ending "the drama critics won't go along with that". ...read more.

He exaggerates and stereo-types the Constable to be stupid and slow-thinking. He also portrays the Superintendent as brutal and s******c. Rather than creating believable characters, he uses instantly recognisable 'stock' characters. Satire - Satire is used frequently throughout the whole play, mostly by the Maniac who uses very obvious sarcastic comments. An example of this is when screams are heard from the police station. This is quite hard hitting and corrupt. Theatre of fact - The play is based on a real life situation in which a falsely accused anarchist "commits suicide". Fo makes this evident by using the Maniac to quote lines from the real investigation 'seized by a "raptus" threw himself out of the window, thus ending his life upon the pavement below'. The V-effect - At the very beginning of the play, the ordinary set and entrance of Bertozzo suggests it will be like any other conventional play. The invisible fourth wall, however, is immediately broken when Bertozzo addresses the audience directly. Also Fo liked to make it obvious to his audiences that it was in fact, just, a play. An example of this is when Bertozzo says 'the author of this sick little play' which really makes it clear to the audience that this play isn't like an ordinary play. You are absorbed into the emotional aspects of the play itself and Fo also liked to send out moral messages to his audiences, making them see the real truth. ...read more.