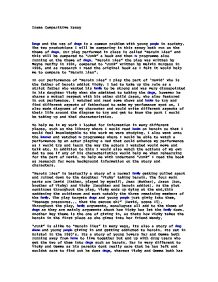 Drama Comparitive Essay Drugs and the use of drugs is a common problem with young people in society. The two productions I will be comparing in this essay both run on the theme of drugs. Our play performed in class is called "Heroin Lies" and this will be compared to "Junk" a book and then tv programme also running on the theme of drugs. "Heroin Lies" the play was written by Wayne Denfhy in 1991, compared to "Junk" written by Melvin Burgess in 1996, and as research I read the original book as I felt it would help me to compare to "Heroin Lies". In our performance of "Heroin Lies" I play the part of 'David' who is the father of heroin addict Vicky. I had to take up the role as a strict father who wanted his family to be strong and was very dissapointed in his daughter Vicky when she admitted to taking the drugs, however he shares a mutual respect with his other child Jason, who also featured in out perfomance. I watched and read some shows and books to try and find different aspects of fatherhood to make my perfomance spot on, I also made diagrams of my character and would write different aspects of their life around the diagram to try and get to know the part I would be taking up and thei characteristics. ...read more.

Its set in Bristol in the 1980's. Its a story of young lovers Tar and Gemma both running away from home to live together but end up with drug users who get the two of them into drugs such as heroin. Tar is very different to Vicky and Gemma as his parents dont really care that he has left and wouldnt care to find out he does drugs, whereas Vicky and Gemma both has protective paresnts that are devasted to find out that their daughters do drugs, although Gemma's dont really ever find out. Again like "Heroin lies" Gemma starts drugs down to peer pressure and giving into friends, "I got something in here that might change your mind" - Tar says to Gemma as he waits to give her a cigarette. Our performance is set in the present day, compared to "Junk" which was set in the 80's. I feel that the 20 year gap between the two productions is hard to tell as drugs have been, and always will be a danger to society and in both we can feel the dangers of heroin taking and the affect its having on characters such as Gemma, Tar and Vicky. ...read more.

I used research from the internet as did other member of the group. Mainly used for the work on our characterisations. We have used props and we have rehearsed our stage direrctions to perfection so that it symblises real family life yet letting the audience see all of the characters and their emotions clearly. Also we used monlogues and hot seating where people would ask us questions and we would answer in character, this helped us and the fellow memebers of the group understand each character with a better undertsanding. In conclusion comapring my groups peformance of "Heroin Lies" and the book "Junk" I feel that they share many similarities and few and far between differeces. The main themes and characters were alike in both productions, even the storylines had its similairites! I have learnt a lot from this whole experience, I learnt not only about heroin and the usage and affect it can have on families, but I learnt how to put that into a performance. Its been a great experience overall, and I have enjoyed working on this project a lot! Also out of it I have read two very interesting different pieces of work, that have left an everlasting impression on me. ...read more.