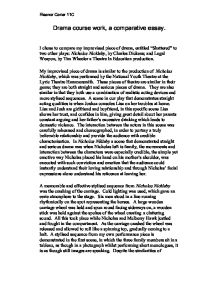 Drama course work, a comparative essay. I chose to compare my improvised piece of drama, entitled "Shattered" to two other plays: Nicholas Nickleby, by Charles Dickens; and Legal Weapon, by Tim Wheeler a Theatre In Education production. My improvised piece of drama is similar to the production of Nicholas Nickleby, which was performed by the National Youth Theatre at the Lyric Theatre Hammersmith. These pieces of theatre are similar in their genre; they are both straight and serious pieces of drama. They are also similar in that they both use a combination of realistic acting devices and more stylised sequences. A scene in our play that demonstrates straight acting qualities is when Joshua consoles Lisa on her troubles at home. Lisa and Josh are girlfriend and boyfriend, in this specific scene Lisa shows her trust, and confides in him, giving great detail about her parents constant arguing and her father's excessive drinking which leads to domestic violence. ...read more.

A large wooden carriage wheel was held and spun round facing sideways on, a wooden stick was held against the spokes of the wheel creating a clattering sound. All this took place while Nicholas and Mulberry Hawk jostled and fought in the compartment. As the carriage crashed the wheel was released and allowed to roll like a spinning top, gradually coming to a halt. A stylised sequence from my own performance piece is demonstrated in the first scene, in which the three family members sit in a tableau, as though in a photograph whilst performing short monologues, it is as though still images are speaking. Despite the similarities of minimalist stage design in both performances, there were many differences between the productions: most noticeably the time period of each of the pieces. Nicholas Nickleby was set in Victorian times, whereas Shattered portrays contemporary family life. ...read more.

at which the lines were delivered; the pitch at which the lines were delivered became higher and also the tensed facial expressions became more noticeable. When planning out scenes for our performance we endeavoured to recreate the gradual, crescendo like increase of dramatic tension. Another similarity between Legal Weapon and Shattered is the sharp contrast between the mood and atmosphere of different scenes. In legal weapon the contrast was very noticeable between the intense emotion and horror felt during the car crash scene and the humour of the flirtatious tensions between the traffic officer and Jazz. The stylised, choreographed dance like nature of the car crash increased the impact, whereas the comical scenes were portrayed in a naturalistic, lifelike manner. In my performance we tried to highlight the contrast the differences between Lisa's corrupted home life of arguments and shouting, and the affection and caring attitudes shared between her and her boyfriend Joshua. Eleanor Carter 11C ...read more.