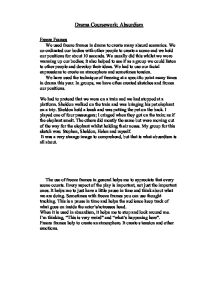 Drama Coursework: Absurdism Freeze Frames We used freeze frames in drama to create many absurd scenarios. We co-ordinated our bodies with other people to create a scene and we held our positions for about 10 seconds. We usually did this whilst we were warming up our bodies; it also helped to see if as a group we could listen to other people and develop their ideas. We had to use our facial expressions to create an atmosphere and sometimes tension. We have used the technique of freezing at a specific point many times in drama this year. In groups, we have often created sketches and frozen our positions. We had to pretend that we were on a train and we had stopped at a platform. Sheldon walked on the train and was bringing his pet elephant on a trip. Sheldon held a leash and was patting the pet on the back. I played one of four passengers; I cringed when they got on the train; as if the elephant smelt. The others did mostly the same but were moving out of the way for the elephant whilst holding their noses. My group for this sketch was: Stephen, Sheldon, Helen and myself. It was a very strange image to comprehend, but that is what abusrdism is all about. The use of freeze frames in general helps me to appreciate that every scene counts. Every aspect of the play is important, not just the important ones. It helps me to just have a little pause in time and think about what we are doing. Sometimes with freeze frames you can use thought tracking. This is a pause in time and helps the audience keep track of what goes on inside the actor's/actresses head. When it is used in absurdism, it helps me to stop and look around me. I'm thinking, "This is very weird" and "what's happening here". ...read more.

This added to the questions like "What is this toy?" "What does it do?" Luke, who played the little boy, played his role rather well because he seemed to be a little child. When he screamed; it made us laugh. He was moving us around like little dolls. I remember that I was in a box-it was my boat-he was pushing the box all over the place. We all used the props well, which was another good point. Climax/Anti-climax For the poem "Sleep, Sleep", my group comprised of Adrian, Becky, Sheldon and myself. We spent a lot of time on the way we were going to present this poem. We eventually got the idea that Becky, Sheldon and myself should chant the poem out loud like witches in a circle, circling Adrian. We also thought that as we got nearer the chorus we should gradually get louder and start circling Adrian quicker. We practised during lessons but couldn't get it right. We were told to perform it while enjoying ourselves. We were given a suggestion of picking four people while performing. We chose four people including Mr. Tekerian. When we performed the poem, we got quicker and louder the closer the chorus was. We shouted the chorus and when the "scream" came, Adrian scared everyone. We had replaced the word "scream" with Adrian screaming. I found it hilarious watching everybody's faces as Adrian jumped out from under the blazer she was under. Nobody was expecting the scream. Everyone was caught out. This built to an effective climax because the audience, especially the four participators were scared. The volume built up and the speed of the play increased, this helped to build up to the scream. As the volume and speed built up, the tension and excitement also accelerated. In this poem we based the whole thing on the chorus. As we led up to it, the volume rose gradually and the quicker movement the more tense the atmosphere was. ...read more.

His plays usually consist of only two characters, just like in "Last to Go". For this play, my group consisted of Luke, Stephen, Adrian and myself. We split the play into two pieces and the group split into two. Stephen went with Adrian, whilst Luke played his part with me. Luke and Stephen shared the role of a barman, whilst I shared my part with Adrian as a customer. Luke moved around the stage looking busy. He used the technique of mime as he performed, both clearing and cleaning tables in the caf�. He did this by pretending to wipe across the table with a wet cloth and drying it. He also used this technique whilst pretending to fire a trigger that released some disinfectant. Luke Spoke enthusiastically, just like a normal barman. This added to his movement to help create both a great, enthusiastic bubbly barman and a fantastic atmosphere. He learned his lines well over the period given and spoke clearly and fluently. Performing without the script showed the effort he put in. This also helped the play to keep tidy. The camera didn't seem to affect him as much as me; he did so well. He didn't seem nervous before performing whilst being filmed. He seemed to make a lot of eye contact with me, his partner, and kept it throughout the play. He kept facing the audience throughout the play, whilst maintaining his eye contact. He used his own knowledge of a barman and added his own ideas to create an improved stereotype barman. He characterised his role well to good effect. These skills, which he performed throughout the play; the other characters, especially me, responded to with enthusiasm and did the same. When we swapped characters, Adrian tagged me and Stephen tagged Luke. From then on he and I held our position whilst in a freeze frame. When Luke and I were tagged we got into our freeze frame positions easily and flowingly. When Adrian and Stephen carried the play on to the end; they played their roles very well. ...read more.