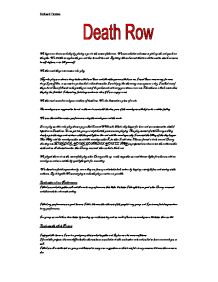 We began our drama workshop by placing a gun in the centre of the room. We were asked to volunteer to pick up the and speak our thoughts. We did this to explore the gun and how it could be used. By doing this we learned that it could be used to attack someone, in self-defence, or to kill yourself. We then used the gun to create a role-play My role-play was about a drug dealer which was Sean and this other person which was me. I owed Sean some money for some drugs I got off him, so we met in a pub we had a chat about when I would pay him the money so we agree on a day. ...read more.

In our play we did a role-play about a guy called Esmond Willis who killed a shopkeeper for $200 and was sentenced to a lethal injection on Death row. So we got into groups and picked the parts we were playing. Are play started of with Danny walking slowly up to the stage and sat down with the spot light on him and said his monologue why I renacted the killing of the shop keeper. Then Abby said her monologue then ste said his monologue then Kim then I said mine. Then we formed a circle around Danny shouting out MURDER, YOUR GONA DEI, YOU'LL PAY we projected are voices out to the audience then at the end we all shouted murder then Danny screamed then we had a black out. ...read more.

I think my performance was good because I did a bit more than the rest of the people in my group and I put more facial expressions in my performance. In a group we could have done better by turning up on the test day and we could of leant are monologues a bit better than we did. Evaluate the whole Project I enjoyed this because I was in a good group that worked together and It give me a lot more confidence. I found this project a bit more difficult than the rest because we had to do this evaluation on it and we had to learn are monologue as well. I think we all contributed as a group and listened to every ones suggestions so that is not fair to say someone did more than someone eles. Richard Dutton ...read more.