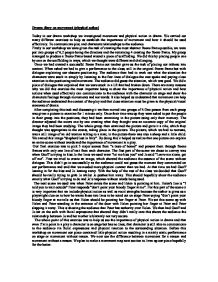 Drama diary on movement (physical action) Today in our drama workshop we investigated movement and physical action in drama. We carried out many different exercises to help us establish the importance of movement and how it should be used effectively. To communicate plot, and characters relationships to the audience. Firstly in our workshop we were given the task of creating the most abstract freeze frame possible, we were put into groups of 6,2 people being the directors and the remaining 4 creating the freeze frame, My group managed to produce a freeze frame based around a piece of scaffolding. We did this by placing people one by one on the scaffolding in ways, which we thought were different and challenging. Once we had created a successful freeze frame our teacher gave us the task of placing our tableau into context. When asked we had to give a performance to the class, still in the original freeze frame but with dialogue explaining our obscure positioning. The audience then had to work out what the situation the characters were stuck in simply by listening to the few lines of dialogue the cast spoke and paying close attention to the positioning and movement. ...read more.

The director adjusted the actors one by one creating what they thought was an accurate copy of the original image they had been studying. The whole group then examined the picture and gave it a title, which they thought was appropriate to the events, taking place in the picture. The picture, which we had to recreate, was a still image of an old woman talking to a man; in the picture there was also a sheep and a little child. We named this image "shepherd lost in Italy". By doing this it helped us realize that one picture can explain an entire scene without words and the importance of movement in a play. Our final exercise was to pick 3 major scenes from "a taste of honey" and present them through freeze frames with only one line of text from each character. The first part of the scene we chose to convey was when Geoff is trying to kiss Jo the lines we used were "let me kiss you" and Jo said "Leave me alone, get off me". ...read more.

We set this scene up with Helen and Peter standing in the entrance of the door with Helen pointing her finger at Peter and Peter slapping it away. This is showing the audience that Peter has authority over Helen. We then had Geoff and Jo sat on the sofa with facial expressions that showed they didn't really care this shows the audience the relationship between Jo and her mother is blatantly not very secure. The whole point of this exercise was to help us see the importance of physical action in drama and that even if at a point in a play a character is on stage but has no lines, that character is still able to communicate to the audience via facial expressions and physical reaction to the surrounding situation. Before this workshop on movement our piece contained little physical action resulting in a mainly static performance on stage or movement without reason. We now see the difference between movement for a reason and movement without a reason. We plan to make a movement map next section to liven up our piece hopefully for the better. ...read more.