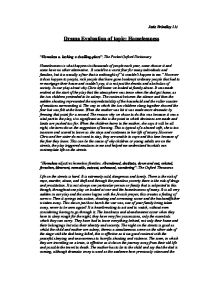 Jade Brindley 11t Drama Evaluation of topic: Homelessness "Homeless a. lacking a dwelling-place": The Pocket Oxford Dictionary Homelessness is what happens to thousands of people each year, some choose it and some have no other alternative. It would be a worst fear for many individuals and families, but it is usually a fear that is unthought of "it wouldn't happen to me." However it does happen to people, rich people that have gone bankrupt ordinary people that had to re-mortgage their house and couldn't pay, it is not just the drunks and alcoholics of society. In our play about why Chris left home we looked at family abuse. It was made evident at the start of the play that the atmosphere was tense when the dad got home, as the two children pretended to be asleep. The contrast between the silence and then the sudden shouting represented the unpredictability of the household and the roller coaster of emotions surrounding it. The way in which the two children clung together showed the fear hat was felt at the home. When the mother was hit it was made more dramatic by freezing that point for a second. ...read more.

They have had to leave everything behind, not only their home and their belongings but also their identity and security. The night on the streets is good as whilst the child and mother are asleep, thereis a simultaneous scene on the other side of the stage with the dad being killed, this is effective as it isa good contrast with the peaceful sleeping and unawareness to horrific shouting and violence. The scene, in which they are travelling on a train, is effective as it shows the journey away from their old life and possible the travel to death. The mother has to lie to the child and say that the dad is coming, although dramatic irony is used as the audience have previously witnessed the ruthless killing of him. The mother is realistic and knows that they are unlikely to see him again although she tries to convince herself otherwise shown in an emotive monologue. Throughout the monologue her husband is there in spirit, it is through his frustration at not being able to see her again that portrays the helplessness of the victims of war. The Jewish prayer is then repeated, it is significant as the audience realise that the horror is not over and that fear and violence is sure to pursue. ...read more.

To these people there is a lack of understanding towards people who need help and are fellow human beings with the same emotions and feelings. This ignorance is shown through the protester play I performed. I chose to use the audience as a representation of the person we were talking to. This put the audience in the middle of the scene and makes them feel as though they were involved, it also enabled the audience to feel the pressure felt by the imaginary politician that was being quizzed. This gained me a perspective that I had been unable to understand before and I managed to feel; the passion provoked by the subject. I learnt during the plays that I performed and studied that people don't always choose to be there and be it from war or own choice or circumstances beyond a majorities comparison, homelessness is ha horrible, lonely, isolated scary place. It is degrading to have to be looked down upon, as a piece of dirt and it is difficult to remember that they need help. So maybe next time I am walking through the streets and somebody positioned as a lump in a sleeping bag inside a shop doorway asks me for money, I will spare the change instead of hurrying by, looking in the opposite direction pretending I didn't hear. ...read more.