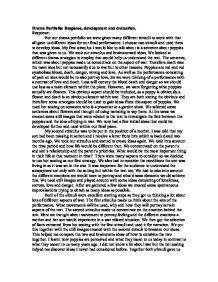 Drama Portfolio: Response, development and evaluation. Response: For our drama portfolio we were given many different stimuli to work with that all gave us different ideas for our final performance. I choose two stimuli and used them to develop ideas. My first stimulus I would like to talk about is a sentence about poppies that was given to us. We took our stimulus and brainstormed ideas. We looked at different drama strategies to employ that would help us understand the text. The sentence, which was about poppies made us concentrate on the aspect of war. Therefore death was the main idea but not necessarily due to war but to other reasons. Poppies are red and red symbolises blood, death, danger, wrong and love. As well as the performance consisting of pain an idea would be to also portray love. So we were thinking of a performance with a contrast of love and death. Loss will convey the blood death and danger so we should use loss as a main element within the piece. However, we were forgetting what poppies actually are flowers. This obvious aspect should be included, as a poppy is obviously a flower and death is an obvious element within war. They are both stating the obvious and therefore some strategies should be used to gain ideas from this aspect of poppies. We used hot seating on someone who is a presenter at a garden show. We selected some sentences about flowers and thought of using narrating to say them. ...read more.

We then shoe the son being murdered by the enemy and his body dumped in the forest. The mother is sitting on a chair and the son on the floor to portray the terrible conditions at war and to define the authority the mother has. The different levels portray the status of both characters. There is silence and the only thing heard is the narration of letter. The silence emphasises the meaning and emotion within the text. Here I decided to use text instead of movement to convey the son's emotions. The son begins to express his loneliness and want for normality. He tells his mother to look at the moon in the sky and explains that they are looking at the same object but are many miles away from each other. He then says,' as long as you can see the moon in the sky I will never stop loving you'. The son uses the natural surroundings which is unseen by the audience to portray his love for his mother. This combination between facts and emotions conveys that love can only be portrayed in what you cannot feel or taste but in what you can see. Here the son starts to cry whilst sitting on the floor. The mother too begins to cry and moves off the chair dropping herself to the floor. Now there is no difference within the status as they are both on the floor. This portrays the fact that the son's love and hurt is equal to the mother's pain and hurt. ...read more.

This would help the audience understand the character and text with greater detail. The costume could have included the cultural and historical feature into the performance. As well as this helping the audience relate to the performance and character, it also gave the person playing the role a greater understanding of the character. This in turn makes the character easier to play. Lighting would have been a great assets to the performance as it would have emphasised the pain and sorrow and we could have made use of black outs and the fading away of lighting. However, the first performance was performed in the dram room, where we do not have access to the lighting facilities. Although the second piece was performed in the drama studio the room was set up for an A level exam and we were not able to alter the lighting due to this reason. If we could have used the lighting we would have used Baroq's idea on using one white light on the main character. This would create a lot of effect on the main character who should be understood in the most detail. Historical, social or cultural features were not considered which meant that the portrayal of the piece within the setting and actors was not achieved to a high degree. In both pieces many aspects are outstanding and are a great credit to the piece however, there are many places where there is room for improvement. Many changes and extra rehearsal would improve both pieces. Taking into account the time we had it would be fair to say that we did remarkably well. Seema Sidhu 11H ...read more.