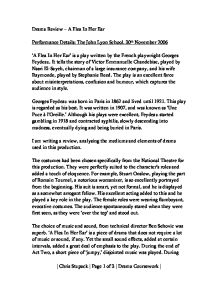 Drama Review - A Flea in Her Ear

Drama Review - A Flea In Her Ear Performance Details: The John Lyon School. 30th November 2006 'A Flea In Her Ear' is a play written by the French playwright Georges Feydeau. It tells the story of Victor Emmanuelle Chandebise, played by Nasri El-Sayeh, chairman of a large insurance company, and his wife Raymonde, played by Stephanie Reed. The play is an excellent farce about misinterpretations, confusion and humour, which captures the audience in style. Georges Feydeau was born in Paris in 1862 and lived until 1921. This play is regarded as his best. It was written in 1907, and was known as 'Une Puce � l'Oreille.' Although his plays were excellent, Feydeau started gambling in 1918 and contracted syphilis, slowly descending into madness, eventually dying and being buried in Paris. I am writing a review, analysing the mediums and elements of drama used in this production. The costumes had been chosen specifically from the National Theatre for this production. ...read more.

This was adamant for this farcical play, as the ludicrousness that is acted out is sharp and quick, thus needing many exits and entrances. As one of the actors, or indeed as a member of the audience, you have to be able to imagine that the outside space is real in order to perform or understand the play to the best of your ability. For instance, in Act Two, when in the Hotel Coq d'Or, The stage right exit door is a bathroom, as opposed to Act One, where it is a hallway. We need to believe that, in each scene, the space behind the door is what the actors say it is. This increases our knowledge of the play, makes the speed and identity tracking slightly less confusing. The set, hired from The Royal National Theatre, was fabulous. I particularly liked the revolving bed in the hotel scene, and the French windows. ...read more.

The farcical confusion, a mixture of people running in and out of the right and wrong rooms, and being in the wrong place at the wrong time is very much loved by people today. World famous television shows such as 'Frasier,' 'Friends' and 'Only Fools and Horses' are brilliant examples of this. One problem with the speed of the piece was that, not for me but others, it would have been a blunder of bewilderment and perplexity. The John Lyon School's production of Feydeau's 'A Flea In Her Ear' was an outstanding performance. It really helped my understanding of the medium of drama. I can relate the movement to my own work, picking up new ideas as well as improving what I currently know. I can see how a few small props can totally enhance a piece of theatre, also seeing that space and levels are entirely needed to show a piece's full potential. Deborah Gibbs has created a masterful drama performance from a play which is complicated and complex. | Chris Stupack | Page 1 of 3 | Drama Coursework | ...read more.