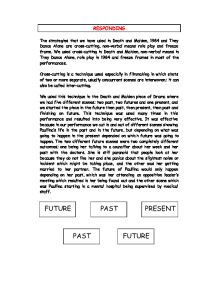 Dramatic interpretation: 'Death and the Maidan' and 'They Dance Alone'

RESPONDING The strategies that we have used in Death and Maiden, 1984 and They Dance Alone are cross-cutting, non-verbal means role play and freeze frame. We used cross-cutting in Death and Maiden, non-verbal means in They Dance Alone, role play in 1984 and freeze frames in most of the performances. Cross-cutting is a technique used especially in filmmaking in which shots of two or more separate, usually concurrent scenes are interwoven; it can also be called inter-cutting. We used this technique in the Death and Maiden piece of Drama where we had five different scenes; two past, two futures and one present, and we started the piece in the future then past, then present, then past and finishing on future. This technique was used many times in this performance and resulted into being very effective. It was effective because in our performance we cut in and out of different scenes showing Paullina's life in the past and in the future, but depending on what was going to happen in the present depended on which future was going to happen. The two different future scenes were two completely different outcomes; one being her talking to a councillor about her week and her past with the doctors. She is still paranoid that people look at her because they do not like her and she panics about the slightest noise or incident which might be taking place, and the other was her getting married to her partner. ...read more.

This non-verbal means technique was only in one scene but was still very effective. If we were to do that scene again we would have used more sounds to fill in the gaps of where the verbal parts would have been. The puppet action to and from the people and robots/computers was very effective because it showed the control over the people and when the people tried to speak when they were not told to do so the computers recognised this and override the command. Then when the people relished that they were not able to do anything, they let the computers take control over the people communication completely. The computers also took over the verbal communication, making it not possible to use verbal means in the scene. Role Play is like pretending to be someone else, taking on the character of that person and acting it out as accurate as you possible can. Sometimes you have to imagine what that character might say or do judging by a short time you have analysed the person. For example if you watch a short clip of the character and what he/she is like, then you have to make up a new scene in the role of that character, you have to imagine what the character might say or do. The role play that we have analyzed and performed is the 1984 piece, where we were given a short scene showing prisoner Tom's character and then we made some short scene showing Tom's journey home everyday. ...read more.

We used freeze frames in the Death and Maiden performance when Paullina had just realised that her torturer was in the same room as her. When she realised that it was her torturer, she went immediately to the kitchen and then the freeze frame came and she spoke what she was thinking. She said that she recognised the laugh of her torturer immediately because obviously her torturer had previously laughed at her, for Paullina to recognise the laugh. When she went to the kitchen she said that she did recognise the laugh as she changed the atmosphere entirely, because she said that she could remember her torturer. As she went back into the room she was in, she than treated her torturer with disrespect and then went to the bedroom. If we were to do the performance again, we would have the laugh of the torturer then a freeze frame in the kitchen of Paullina, feeling very upset and breaking down mentally again. Then as Paullina goes back into the living room, she would have then slightly questioned Dr. Miranda then in a big panic make an exit for the bedroom. This would have indicated that Paullina had still been afraid of ever meeting her torturer and when she did, she would still feel as helpless as she did then and in the scene. When Paullina realised her torturer was in the room, she moved to the kitchen where she felt safer and then when the freeze frame came, she convinced herself who the guest was and wanted revenge. ?? ?? ?? ?? ...read more.