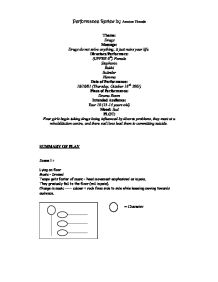 Drugs do not solve anything; it just ruins your life.

The way they sit can portray many things to an audience, for example; Rea who is sitting on a chair shows, she has had a miscarriage, therefore maybe in pain both back and stomach wise, which by sitting on the floor could lead to further discomfort. Alice who is lying on the floor, fidgeting is trying to go against the stereo-typical ways of a rich girl, who would usually be seen sitting on a chair with her leg's crossed and hands neatly in the lap. Donna who is crossed legged on the floor portrays mature behaviour, which is due to her age, and is sitting casually not sending any signals to the others. Sam who is sitting with her knees curled up towards her chest and her back to the rest of them shows she feels threatened by the others maybe because of the age and her individuality of being homeless. She turns her back to them sending a signal to the rest of them that she wants to be left ALONE like she is use to. Many of the reactions in the play were true for example when Rakhi threw the chair in anger, this is a reaction that is quite common when in distress throwing whatever is in front. The characters were projected well both orally and visually, in the way that we were able to hear everything each character said throughout the play without difficulty. ...read more.

This shows they conveyed their message efficiently. The audience responded at the proper times with the proper emotions, i.e.: they did not laugh at a point where seriousness was required. My opinion of the play as a whole would be that it was well structured and I did not loose interest, at any time of the production which is a sign that the piece was satisfying and left me thinking about the message conveyed. I agreed with the message that was being conveyed as I also believe that drugs is a waste of time and money and can also lead to a waste of life, a s it does not solve your problems. What I specifically disliked was the use of foul language, I thought it was un-necessary and instead of realism, it added humour, often to where it was not needed. I do not believe that the only way to interest 13-14 year olds is through bad language it just conveys a bad message along with the good. I personally feel that the play could be improved by beginning the play with the last scene, which was telling us who the play was a tribute to and why. This would have given us a slight insight to what the first scene was all about, as it seemed from the reaction of the audience that they did not understand what they were doing. Overall, an excellent performance that is right for the intended audience. In addition, I would not mind watching it again. ...read more.