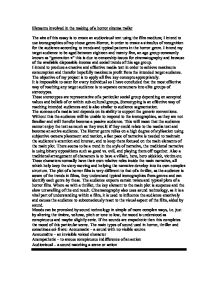 Elements involved in the making of a horror cinema trailer

Elements involved in the making of a horror cinema trailer The aim of this essay is to create an audiovisual text using the film medium; I intend to use iconographies of my chose genre-Horror, in order to create a stimulus of recognition for the audience according to trends and typical patterns in the horror genre. I intend my target audience to be aged between eighteen and twenty five, an age group commonly known as "generation x" this is due to censorship issues for cinematography and because of the available disposable income and social trends of this age group. I intend to produce a creative and effective media text in order to achieve maximum consumption and therefor hopefully maximum profit from the intended target audience. The objective of my project is to apply all five key concepts appropriately. It is impossible to cater for every individual so I have concluded that the most effective way of reaching any target audience is to separate consumers into elite groups of stereotypes. These stereotypes are representative of a particular social group depending on accepted values and beliefs of or within sub-cultural groups, Stereotyping is an effective way of reaching intended audiences and is also similar to audience segmentation. ...read more.

The plot of a horror film is very different to that of a thriller, as the audience is aware of the trends in films, they understand typical iconographies from genres and can identify each genre by these. The audience expects certain twists and typical plots of a horror film. Where as with a thriller, the key element to the main plot is suspense and the slow unravelling of the end result. Cinematography also uses sound technology, as it is a vital part of understanding within a film, it is used to influence the audience emotively and causes the audience to subconsciously react to the visual aspect of the film, aided by sound. Moods can be provoked by sound technology in simple of more complex ways, i.e. just by altering the timbre, volume, pitch or tone to low, the mood is understood as conspicuous and maybe slightly eerie. If the sounds are empathetic then this completes the mood of this particular scene. The main types of sound used in horror, thriller and sometimes sci-fi are: Acousmatic - a sound with no visible source Acousm�tre - an invisible voiced character Anempathetic - to arouse conspicuous ...read more.

The reason why I have chosen this genre is because of my personal interest and the recent success of psychological / thriller horrors. Personally I enjoy watching horror films because of the suspense and satisfaction of escapism, watching something that wouldn't ordinarily be seen in everyday life. I enjoy being able to look into other peoples lives, that are represented to be similar to me, I like to observe their actions and surroundings, whilst comparing them to my own.I feel that I have chosen an appropriate area to design my project around. This is due to the recent releases of films during the last year; such as The Blair witch project number one and two, and jeepers creepers etc, which are based more around psychological thrillers and horror rather than the classic horror films involving typical iconography's. These iconographies were usually monsters and demons etc. as featured in films such as hellraiser and the exorcist etc. So theoretically, as there is a high demand for these type films at the moment, if my trailer was for a film, which was being released, My film, may, when broadcasted to a mass audience, prove to be popular due to mass demand. ...read more.