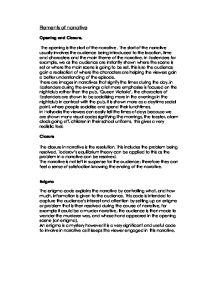 Elements of narrative Opening and Closure. The opening is the start of the narrative . The start of the narrative usually involves the audience being introduced to the location, time and characters and the main theme of the narrative. In Eastenders for example, we as the audience are instantly shown where the scene is set or where the main scene is going to be set, this is so the audience gain a realisation of where the characters are helping the viewers gain a better understanding of the episode. There are images in narratives that signify the times during the day, in Eastenders during the evenings a lot more emphasise is focused on the nightclub rather then the pub, 'Queen Victoria', the characters of Eastenders are shown to be socialising more in the evenings in the nightclub in contrast with the pub, it is shown more as a daytime social point, where people socialise and spend their lunchtimes. In Hollyoaks the viewers can easily tell the times of days because we are shown many visual codes signifying the mornings, the toaster, alarm clock going off, children in their school uniforms. This gives a very realistic feel. Closure The closure in narrative is the resolution. ...read more.

Dialogue and music Dialogues can be presented in many different languages and styles. There are many different dialects used in television to fit that time or place, films from different times will include a different dialect for example films set in the past 'Pride and prejudice', the dialect and language used was very old English to represent that era making the film more realistic. The music used in the film would be very much of that time too, the music would be very classical emphasising that era. However in contrast to modern day programmes aimed at children, the language used would be very simplistic allowing children to understand the programme, the music would be extremely lively keeping the children entertained. Language Style. People adopt different speech registers in different situations. Some are more formal than others. Newsreaders use very formal language to signify importance and great meaning as serious issues are raised. The language styles are very varied in terms of genre, in a family film for example Shrek, the language would be comedic and very colloquial to appeal to all ages. In gangster films the language will tend to be more harsh, rigid and firm to signify intimidation and threat. Costume/Appearance/Performance Costumes are major codes in narrative. ...read more.

Use of Time and space. The main techniques to show passing of time are: * Compression-we see on screen the seasons rapidly changing, or the time in the day. The portrayal of day to night. * Ellipsis-A long series of events is cut down to a few significant shots. * Freeze frame- A still image appears on screen and a narrator or voice-over tells us that years have passed by. * Slow motion- time can be stretched and emphasis given to a scene through slow motion. * Flash backs - the filmmaker can make us travel back in time. Space is important in filmmaking because characters are shown from different camera angles. They way in which the characters are shot can give out many meanings to the viewers. We can also get a point of view shot showing the audience what the character can see, it puts us in their position and also allowing us to feel more involved in the narrative. Alternative narratives An alternative narrative structure is one that is 'different' in either content or form. It may ignore or change codes and conventions, or it may treat the various different components in unusual or unexpected ways. For example pop videos are considered alternative by some older people, the use of different camera angles and special effects could be a bit off putting . ...read more.