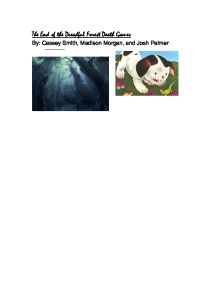 Throughout the day, he was abandoned by the entire assortment of players. Hitler vowed revenge. The merciless dog began his task. Death was the solitary preference. Depraved Elephant was first. Hitler Puppy clamped the cold metal between his paws. Slowly creeping behind the vast elephant, Hitler ran the knife deep in the back of Depraved's heart. One down, too many to go the dog thought to himself as he reached for the knife, penetrating the elephant's back. The next victim was Deprived Lion. Hitler thought about his menacing attack while the others discovered Depraved Elephant. Screams throughout the background, Hitler advanced towards the lion. Building conversation, Hitler distracted him long enough for his friend, Deceitful Snake, to bite the defenseless lion. ...read more.

Right before the massive lunge, the bomb would detonate; if it didn't work, he manipulated the train to collapse during the plunge, sending everyone to their death. Hitler watched the train car, with its unfortunate passengers, reach the peak. The bomb went off, burning the travelers to a crisp. Their screams alarmed Hitler, his advanced hearing became mangled. The structure began to descend upon the rough terrain below, killing all in its line of attack. Hitler sneered. The corpses were left at the scene; they reside in the same location today, but the remains are just scorched bones. At the end of the day, Hitler Puppy came home and showed off his blue ribbon that he had "won" to his mother and family. The Dreadful Forest Police decided that the town should end the Death Games since it "promotes violence". That was the end of the Death Games in the Dreadful Forest. ...read more.