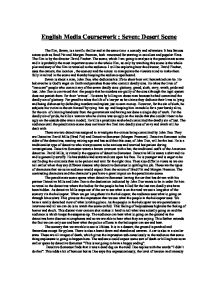 English Media Coursework : Seven: Desert Scene The film, Seven, is a terrific thriller and at the same time a comedy and adventure. It has famous actors such as Brad Pitt and Morgan Freeman, both renowned for starring in excellent and popular films. The film is by the director David Fincher. The scene, which I am going to analyse is the penultimate scene and it is probably the most important scene in the whole film, as only by watching this scene is the whole plot and story of the film is revealed to the audience. I will be exploring how the director, David Fincher, uses the camera, the location , the scenery and the actors to manipulate the viewers mind to make them fully involved in the scene and thereby keeping the audience spellbound. Seven is about a man, John Doe, who dedicates his life to show how evil humankind can be. He believes he is God's angel on Earth and punishes those who commit deadly sins. He takes the lives of "innocent" people who commit any of the seven deadly sins: gluttony, greed, sloth, envy, wrath, pride and l**t. John Doe is convinced that the people that he murders are guilty of the sins although the legal system does not punish them for their 'crimes'. ...read more.

This distant view camera shot makes it hard to tell what was actually going on and the audience is which keeps the suspense up. The audience can hear what is going on the ground as the detectives have discreet microphones and so we are able to hear what they are saying. This further extends the fact we can only see and hear what the police officers in the helicopter can see and hear. The scenery that we are able to see is lifeless. It is in a dessert, the ground is parched and featureless except for pylons. There is also a burnt down and abandoned caravan. A car is also in a similar state. These are all images of death, which gives the impression sub-consciously to the audience that some thing unpleasant is going to happen here. The audience could expect some sort of death or killing here as an earlier quote by detective Somerset "This is not going to have a happy ending". Detective Somerset finds that it was a dead dog on the road. Doe replies with the words "I didn't do that". This adds a bit of humour but as Doe says this expressionlessly, the level of tension and intensity of the scene is maintained. When John Doe says these words just after he steps out of the car we as an audience look up at him because ...read more.

Somerset realises that if Mills does kill Doe then the plot will be complete, as he would have committed the deadly sin of wrath. The camera spins round Mills to show us that he is confused and he doesn't know what to do. The music gets louder and heavier to build up intensity in the film. Again we look from the view of the helicopter which just shows images of death. Mills resolves to shoot Jon Doe and the story and plot is complete. We then zoom out to the helicopter view where we can see Mills walking away but we look down on him still to pity him. We also look down on Somerset to sympathise with him as he tried his best but he couldn't stop what was out of his hands. I think that the camera angles and scenery and music were used to a superb effect to capture the audience's mind. I am sure David Fincher spent a lot of time thinking about this and it all worked perfectly to make the audience see and feel what David Fincher wants us to see and feel. He was able to rapidly change the atmosphere we are put in. By the use of camera angles we are made to pity, love, hate and sympathise with the characters, as he wants us to. He directed the film perfectly and it became an instant hit. ...read more.