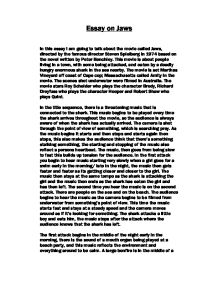 Essay on Jaws In this essay I am going to talk about the movie called Jaws, directed by the famous director Steven Spielberg in 1974 based on the novel written by Peter Benchley. This movie is about people living in a town, with some being attacked, and eaten by a deadly hungry enormous shark in the sea nearby. The movie is set Marthas Vineyard off coast of Cape cop; Massachusetts called Amity in the movie. The scenes shot underwater were filmed in Australia. The movie stars Roy Scheider who plays the character Brody, Richard Dreyfuss who plays the character Hooper and Robert Shaw who plays Quint. In the title sequence, there is a threatening music that is connected to the shark. This music begins to be played every time the shark arrives throughout the movie, so the audience is always aware of when the shark has actually arrived. The camera is shot through the point of view of something, which is searching prey. As the music begins it starts and then stops and starts again then stops, this also makes the audience think that there's something stalking something, the starting and stopping of the music also reflect a persons heartbeat. The music, then goes from being slow to fast this builds up tension for the audience. In the first attack you begin to hear music starting very slowly when a girl goes for a swim early in the morning/ late in the night, the music then gets faster and faster as its getting closer and closer to the girl. ...read more.

The audience feels sorry for Brody and don't want anything to be hurting or harming him because he plays the character of as good guy in the movie, we are emotionally motivated by them. The audience, gets worried when Brody's children are in the sea, because we want them to be safe, this is also because we don't want too much on Brody's mind, for him to breakdown and not help save other peoples lives. The book of shark scares the audience and also surprises them, as they see the disturbing images of shark attacks, wounds and scars given to humans by sharks, page by page flickering through the book. The audience doesn't want anything like that to happen to anyone. The destruction of the jetty builds up tension for the audience as the two men throw in the chunk of meat attached to a chain in the sea. The shark eats the meat and the shark pulls the chain. As the chain is pulled the two men fall into the sea and the jetty is destructed. One of the men, jump back up to the shore, but one of them is still pulled back by the chain attached to the jetty. The audience begins to get worried as a lot of tension is built because we think that the shark will attack the man, and the audience want him to swim back. The man at the shore is encouraging the man in the sea to swim back as fast as he can. The audience wants the man on the shore to help the guy that's in trouble. ...read more.

A few seconds later the shark jumps up above the sea and tries to jump on to the boat and attack Brody and Quints. This time the audience actually gets to see how big the shark is for the first time throughout the movie, and the size is a big shock for them. Maybe that's the reason why the director avoids showing the shark previously in the movie. While trying to attack the two, the shark destroys the boat meanwhile Brody and Quints try to run further and further away from the shark. The shark finally attacks Quints the fisherman, the audience are worried and want something to stop the shark from eating him, but there's no one to help him as Brody is trying to save his own life. There's blood everywhere and the shark finally eats up Quints. Brody throws a can full of gas to attack in so it gets hurt, fortunately the can lands in his mouth. Brody then picks up a gun and aims it on the can so it blows the shark, after many attempts the can bursts and there's a big explosion inside the sea. Brody starts to laugh in joy; all of a sudden Hooper jumps out of the sea, and swims up to the remaining peaces of the boat. That was the end of the beastly shark. In this movie I did not actually find any if the scenes scary or really funny but I found one scene terrifying and that's when; the shark eats Alex up. I found it terrifying because it's usually emotional to see anything-horrible happening to a child or to children. By/ Afsheen Mahomed 10KA ...read more.