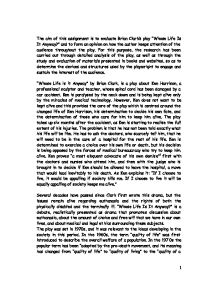 The aim of this assignment is to evaluate Brian Clark's play "Whose Life Is It Anyway?" and to form an opinion on how the author keeps attention of the audience throughout the play. For this purpose, the research has been carried out through detailed analysis of the play, as well as through the study and evaluation of materials presented in books and websites, so as to determine the devices and structures used by the playwright to engage and sustain the interest of the audience. "Whose Life is it Anyway" by Brian Clark, is a play about Ken Harrison, a professional sculptor and teacher, whose spinal cord has been damaged by a car accident. Ken is paralysed by the neck down and is being kept alive only by the miracles of medical technology. However, Ken does not want to be kept alive and this provides the core of the play which is centred around the changed life of Ken Harrison, his determination to decide his own fate, and the determination of those who care for him to keep him alive. The play takes up six months after the accident, as Ken is starting to realise the full extent of his injuries. The problem is that he has not been told exactly what his life will be like. He has to ask the doctors, who scarcely tell him, that he will need to be in the care of a hospital for the rest of his life. Ken is determined to exercise a choice over his own life or death, but his decision is being opposed by the forces of medical bureaucracy who try to keep him alive. Ken proves "a most eloquent advocate of his own demise"1 first with the doctors and nurses who attend him, and then with the judge who is brought in to decide if Ken should be allowed to leave the hospital, a move that would lead inevitably to his death. ...read more.

Due to the atmosphere created by the author, I felt that the idea of control and power is very much the theme of Clark's play. The degree to which Harrison must submit to the power of those who "know best" is chillingly highlighted in an early scene when Harrison is injected with a sedative against his will by D. Emerson. However if in Act 1 I see Ken as a powerless disabled patient controlled by the nurses, the doctors and the whole medical system, in Act 2 it seems that the atmosphere of powerlessness changes: the author brings the audience into the courtroom setting, where Harrison after all becomes in control of his life and death. Despite the fact that his physical condition has not changed (Dr. Scott still has to raise his hand for him to take the oath), I felt that in this scene Harrison becomes a defeater on so to say intellectual and spiritual levels: Ken wins his final battle against bureaucracy and authority. I think the contrast of the atmosphere in the hospital and the courtroom scenes adds to the dramatic power of the play, which also helps to sustain the interest of the audience. The structure of the play skilfully takes the audience from one scene to another revealing the outline of the plot. The title starts the play with a question and all further events are to answer to it. The title in a way shows that it is meant to be, partly, a clash of wills between two conflicting sides. In Act 1 the audience finds out about the main character, Ken Harrison, about his accident and the injuries it caused. Dr. Emerson, the attending physician, believes that Ken is merely depressed and that if given more time will choose to live. He states, "It is impossible to injure the body to the extent that Mr. Harrison had and not affect the mind." ...read more.

I think what is significant about the play is that it ends before the actual ending, i.e. before the judge actually announces his verdict, which to a point is immaterial. I think it is not the verdict that matters in this play, but making the audience think about the issues. With the development of medical technology, people can now have a better quality of life. Moreover, many lives, which normally would not survive without the advance in medical treatment, can now be artificially prolonged. The central character Ken Harrison, has met this situation. Nevertheless, I think it is cruel to ask him to face this life if he does not desire to. He can no longer sculpt, run, move, kiss, or have any form of s****l fulfilment. Obviously, his normal life has drifted away. Should his state really be classified as life? Many people might disagree with the fact he is already dead. Certainly, he is medically alive, but spiritually, can he really be classified as such? I think to sustain people's lives, just because the technology is available, is unacceptable under certain circumstances. It is the individual patient who must make a decision about whether to keep himself alive: "What is the point of prolonging a person's biological life if it is obtained at the cost of a serious assault on that person's liberty? There is probably no simple answer for this question. Any patient's decision should be respected, not based on the fact of all available technologies."4 Finally, the play offers a fascinating study of some uses of humour in medical situations and many opportunities to discuss healer-patient relationships. 1 Bernardo L., 2002, "Should You Be Kept Alive No Mater What?", Lewes: Falmer Press, p.16 2 Robert, H., Welsh, R. "A Christian Response To Euthanasia" Online. Available from: http://www.u-turn.net/3-3/euthan2.html 3 Saffell, M. Review of "Whose Life Is It Anyway?" Online. Available from: http://www.next-stage.co.uk/whose_life_-_bath_review.htm 4 Doyle, R.N. "ASSISTED SUICIDE A Pro-Life Primer on Euthanasia" Online. Available from: http://www.all.org/issues/ie03.htm 8 ...read more.