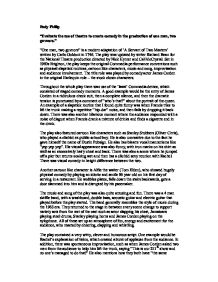 Evaluate the use of theatre to create comedy in the production of one man, two guvnors

Fady Philip "Evaluate the use of theatre to create comedy in the production of one man, two guvnors." "One man, two guvnors" is a modern adaptation of 'A Servant of Two Masters' written by Carlo Goldoni in 1746. The play was updated by writer Richard Bean for the National Theatre production directed by Nick Hytner and Cal McCrystal. Set in 1960s Brighton, the play keeps the original Commedia performance conventions such as physical slapstick routines, cartoon like characters, music and song, improvisation and audience involvement. The title role was played by comedy actor James Corden in the original Harlequin role - the stock clown characters. Throughout the whole play there was use of the 'lazzi' Commedia device, which consisted of staged comedy moments. A good example would be the entry of James Corden in a ridiculous check suit, then a complete silence, and then the dramatic tension is punctuated by a comment of "who's that?" ...read more.

There was also a scene where he jumped off a pier but returns soaking wet and then has a clich�d sexy reunion with Rachel. There was visual comedy in height difference between the two. Another cartoon like character is Alfie the waiter (Tom Elden), who showed hugely physical comedy by playing an idiotic and senile 86 year old on his first day of serving in a restaurant. He wobbles plates, falls down the stairs backwards, gets a door slammed into him and is disrupted by his pacemaker. The music and song of the play was also quite amusing and fun. There was a 4 man skiffle band, with a washboard, double bass, acoustic guitar and electric guitar that played before the play started. The band generally resembles the style of music during the 1963 era. ...read more.

My favourite aspect about the play was the amount of audience involvement. Moments such as the sandwich sequence, with James Corden constantly referencing to the audience with his reaction to maltesers and sandwich offers. Also, the Christine Patterson sequence was very believable and convincing up to point where she got sprayed with a fire extinguisher and then taken off the stage by a member of stage management. Overall I really enjoyed watching this play and found it hugely enjoyable and entertaining. I liked how it had a mix of traditional Commedia with 21st century comedy. The audience interaction moments were the most shocking yet hilarious. Newspaper The Sun describes "One Man, Two Guvners" as a "slapstick comedy, double entendres, an amazing cast and even a Corden xylophone solo amounts to staggering value for money and a proper old-fashioned giggle," In addition, newspaper The Guardian described it as "one of the funniest productions in the National's history". ...read more.