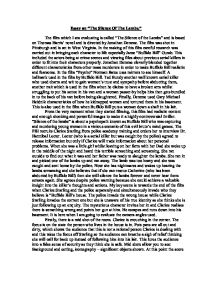 Evaluating The Silence Of The Lambs.

Essay on "The Silence Of The Lambs." The film which I am evaluating is called "The Silence of the Lambs" and is based on Thomas Harris' novel and is directed by Jonathan Demme. The film was shot in Pittsburgh and is set in West Virginia. In the making of this film careful research was carried out in bringing each character to life especially Jame "Buffalo Bill" Gumb. This included the actors being at crime scenes and viewing files about previous serial killers in order to fit into their characters properly. Jonathan Demme cleverly blended together different characteristics from other mass murderers in order to make Buffalo Bill realistic and fearsome. In the film "Psycho" Norman Bates uses mirrors to see himself. A hallmark used in the film by Buffalo Bill. Ted Bundy another well known serial killer who used charm and wit to gain women's trust and sympathy before abducting them, another trait which is used in the film when he claims to have a broken arm whilst struggling to put his settee in his van and a woman passer-by helps him then gets bundled in to the back of his van before being slaughtered. Finally, Demme used Gary Michael Heidnik characteristics of how he kidnapped women and tortured them in his basement. This is also used in the film when Buffalo Bill puts a woman down a shaft in his lair. From the very moment when they started filming, this film had realistic content and enough shocking and powerful images to make it a highly controversial thriller. "Silence of the lambs" is about a psychopath known as Buffalo Bill who was capturing and murdering young women in a vicious scenario of this evil brute's mind games. The FBI recruits Clarice Starling from police academy training and orders her to interview Dr. Hannibal Lecter. Lecter (who is a serial killer but was caught by the police) ...read more.

He then pauses and c***s the hammer. Its loud metallic click tips Clarice to his location. She reacts and spins around firing flaming shots from her gun muzzle at him, at point blank range. She hits the floor and struggles to reload her gun cylinder, there is no need. Gumb lay lifeless gurgling blood from his throat and dies a few feet away. The threat (Buffalo Bill) is put across in different ways throughout the film. At times you see his ruthless inhumane inner self. He murder's several innocent women in his sad sorrowful bid to become accepted into society for who he is. He not only murdered them but brutally butchered their bodies to make himself a new skin. Realising that he is not acknowledged by others he feels the need to adapt himself and change his s*x to become accepted with the rest of us and punishes his victims the way he feels let down by the rest of the society. This has the effect on the audience that they don't know whether to feel sorry towards him or resent towards him to his vicious acts of insanity. Just what he thinks he can achieve by all of his actions bewilders me. How many of us feel sorry for him as we have all not been accepted for particular interests such as supporting a different football team. Are his actions of normal sanity, would we act in the same way faced in the same situation? Whatever your views on the deranged serial killer what gives him the right to murder and butcher others for no apparent reason. I feel he is portrayed in just the right light to make this film as successful as it has been. It is not far away from reality and Buffalo Bill's thoughts and actions match the ones we associate with a serial killer and his motive is extraordinary as we puzzle whether or not to condemn this mass murderer. ...read more.

The contrast of light to dark. How the camera cross cuts between images. How the framing is used to focus on specific objects which have purpose in a part later in the film (iconography). There are not many special effects used in this film. Fading is also used in the film to fade from one shot into the next to produce a different setting. I think the scariest moment in the film is when Lecter is talking to Clarice through the glass of his cell and he questions whether or not she is scared of him. He then slowly walks to the glass where Clarice is standing. The camera zooms in on Lecter's face. He scowls and then makes a slithering noise as though he is sucking the blood out of you. I think this is the scariest part in the film because I did not expect him to do that and it made me jump and move back. Other parts in the film could be just as scary but are too predictable but still very effective. That part also fits in well with his character as he is intimidating but a loveable rogue. The fact that you know he can't get to Clarice but he is still frightening from behind the glass builds up suspense and tension as it shows how scary and threatening he is. The close up shot also made it look like he was looking straight at me from the audience and as though he could get out of his cell. I think overall the suspense and tension is built up very well throughout the film and is cleverly put across in different ways through their symbolic characters. I think this is the best thriller I have ever seen as it has a sense of realism about it without being too unbelievable and because the actors fit into their roles so well it only adds to the story. Clarice Starling's character is a work of a genius and how they risked using a woman as the more dominant character in the film really makes it so much better. ...read more.