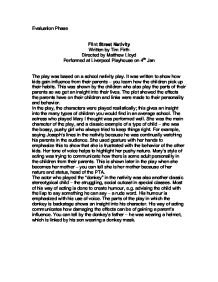 Evaluation Phase Flint Street Nativity Written by Tim Firth Directed by Matthew Lloyd Performed at Liverpool Playhouse on 4th Jan The play was based on a school nativity play. It was written to show how kids gain influence from their parents - you learn how the children pick up their habits. This was shown by the children who also play the parts of their parents so we get an insight into their lives. The plot showed the effects the parents have on their children and links were made to their personality and behavior. In the play, the characters were played realistically; this gives an insight into the many types of children you would find in an average school. The actress who played Mary I thought was performed well. She was the main character of the play, and a classic example of a type of child - she was the bossy, pushy girl who always tried to keep things right. For example, saying Joseph's lines in the nativity because he was continually watching his parents in the audience. She used gesture with her hands to emphasize this to show that she is frustrated with the behavior of the other kids. ...read more.

The multiple staging also reveals the children's emotions. The director was trying to create a general effect with lighting. Lighting was used to create mood - red lighting was used to show anger of the teacher. It also helped to define cross-cutting scenes, which was effective, because it helped the audience to understand the location of the scene, e.g. backstage. Lighting also created atmosphere and realism of scenes, for example using the appropriate lighting to show inside and outside locations such as the playground - in the winter dark, and the nativity play in the bright school hall. A moment in the play when lighting was used to good effect was halfway through the play with the appearance of the innkeeper. Red lighting was used to show the jealousy and angry mood of this character. When the innkeeper stepped out, the stage went red to show his anger towards Joseph. Red also symbolizes stop, and this was used - everyone stopped when he came on. The use of sound in the play adds a general effect was mainly put forward in songs. When Christmas carols were sung, the children sang different lyrics to add comedy and to reveal the feelings, this added insight into the character's lives. ...read more.

The first time added humour and it was more surreal, because the innkeeper glared at Joseph and said nothing. Red lighting emphasized the surreal aspect. At the second half, the same scene was repeated again and it was more realistic. The use of repetition in the climax leads to marking the moment of the scene. The climax was successful due to this. In the final scene of the nativity, slow motion was used, to show the childlike qualities of each character, eg: being in space, and also highlighted each character's counter objectives. The use of slow motion also marks the moment so the audience can see what each character is doing. The use of thought tracking through song lyrics was successful because it told what the character's feelings were and it makes the audience feel closer to the play, especially when humour is added. Overall, the play, to me is a very successful play. Excellent use of lighting, sound, conventions and staging brings the audience closer, and these points are emphasized by humour. I would recommend this for people to watch, as a cheap school nativity is something we are all familiar with. The TV version of the play has extra characters and humour added to it, and in my opinion it has much better context. ...read more.