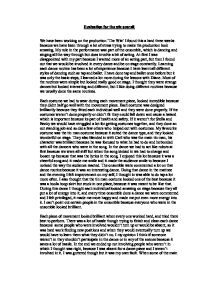 Evaluation for the wiz overall

Evaluation for the wiz overall We have been working on the production 'The Wiz' I found this a hard three weeks because we have been through a lot of stress trying to make the production look amazing. My role in the performance was part of the onsomble, which is dancing and singing all the way through but does involve a bit of acting. At first I was disappointed with my part because I wanted more of an acting part, but then I found out that we would be involved in every dance and be on stage constantly. Learning each dance routine has been a lot of experience because I have learnt all different styles of dancing such as tap and ballet. I have done tap and ballet once before but it was only the basic steps, I learned a lot more during the lessons with Diane. Most of the routines were simple but looked really good on stage. I thought they were strange dances but looked interesting and different, but I like doing different routines because we usually done the same routines. Each costume we had to wear during each movement piece, looked incredible because they didnt half go well with the movement piece. Each costume was designed brilliantly because they fitted each individual well and they were done properly. ...read more.

We overcome this situation, by speaking to one another and everyone started to realise they need to get their act together because they will look stupid on the night and they will loose out on their parts. They then realised we didn't have long to go for the show and I think they needed to realise this at first and we wouldn't of had any problems. I noticed a lot of people who were determent to try their best on stage and was always eager to be the best they can, such as I thought both Dorothy's Chloe and Amy were always on board, they were given notes but always took notice to what they were asked to improve. I thought both there voices were amazing and they suited the part. I always enjoyed watching them, and there confidence has improved a lot on their singing. I thought al the friends Dorothy, tin man, lion and scarecrow all performed their best in rehearsals and the actual show days, but they put a lot more energy and enthusiastic into the show days. In one or two matinees I noticed they found it difficult to bond with the audience because there were a lot of children, because most of the children started to get bored because they didn't understand the storyline and the main characters started to loose concentration ...read more.

The song they had to sing was then split up and given away to onsomble which I thought was unfair because the Glindas were only on stage for a few minutes, and onsomble are on stage throughout the production. I thought Lauren and Emma sung the song tremendous because they had a strong and sweet voice which explains Glindas character. I thought the song was then spoilt by individuals singing it, because it was much better when just Glinda had to sing it. I thought that was awful when their song was split up and given away. There were several complaints then about that song getting ruined and they eventually sorted something out, so both Glindas got the chance to sing much more lines, but I still think onsomble shouldn't have had any lines. There were a lot more characters who I enjoyed but the people who I have mentioned where my favourites and stood out a lot to me. No matter what problems we had throughout the rehearsals we managed to overcome them by discussing what we felt and what we thought and helping one another out. I loved taking part in this show and I think it's the best show we have done and I would love to do it again one more time. Each night I thought went brilliant because everyone put their heart and soul into the performance and made the show be out standing. ...read more.