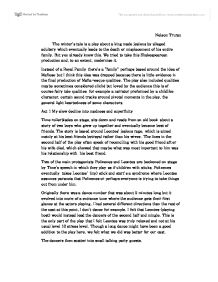 Evaluation of a Winters Tale

Nelson Truran The winter's tale is a play about a king made jealous by alleged adultery which eventually leads to the death or misplacement of his entire family. But you already know this. We tried to take this Shakespearean production and, to an extent, modernise it. Instead of a Royal Family there's a "family" perhaps based around the idea of Mafioso but I think this idea was dropped because there is little evidence in the final production of Mafia-esque qualities. The play also included qualities maybe sometimes considered clich� but loved by the audience this is of course fairy tale qualities for example a narrator preformed by a childlike character, certain sound tracks around pivotal moments in the play, the general light heartedness of some characters. Act 1 My slow decline into madness and superfluity Time rollerblades on stage, sits down and reads from an old book about a story of two boys who grew up together and eventually became best of friends. The story is based around Leontes' jealous rage, which is aimed mainly at his best friends betrayal rather than his wives. The lines in the second half of the play often speak of reconciling with his good friend after his wife died, which showed that maybe what was most important to him was his relationship with his best friend. Two of the main protagonists Polixenes and Leontes are beckoned on stage by Time's speech in which they play as if children with sticks, Polixenes eventually takes Leontes' (my) ...read more.

So we changed it to two men on either side of the stage and one man (Paulina's husband) standing near the room entrance. When Paulina entered they would stay in the same position but I'd move closer until she leaves and one of the servants would get down on his knees with the baby to beg me not to kill it, this is a two pointer, 1. He went down on his knees to lower himself to show the audience who has the most power 2. Getting down on ones knees is a sign that you submit yourself to the person to which they could do what they want, for example when people pray in most religions they kneel or lower themselves somehow to show they 'submit to god' I also researched and found that some animals do similar things for example a dog will roll onto their back to submit to the stronger better dog, in this case me. This was soon followed by everyone getting down on their knees to show I was in power. I found it was more effective than the previous staging because it lowers the presence of the other three so the audience knows where they should be focused in that scene. Which in this case was me. We did several staging effects to show this for example in Act 5 (more on that later.) Act 3 The scene in which Leontes' life is pretty much destroyed This is the court scene Hermione pleaded not guilty to which Apollo's oracle agreed, but Leontes put off the oracle as falsehood. ...read more.

and after that was a close 1 maybe 2 at times CLOSEST FRIENDS IN PLAY: I would consider Polixenes his closest friend, this is why he wanted him to pay when my character felt he was crossed by him and Camillo, who probably was the second closest. CLOSEST ENEMIES IN PLAY: Probably Polixenes as well, it took a great betrayal but for a while he was the biggest enemy of Leontes STRENGTHS: Powerful, dominant, has leadership qualities WEAKNESSES: Jealous, Fascist, Powerful (when combined with the previous traits,) PROPS & COSTUME: starts with a suit, all black red tie, to symbolically show that he is a danger. Training Stick: used to symbolically identify to the audience that Leontes is afraid of getting things stolen from him, he is taunted with it by Polixenes. Wine glass: used through an entire scene and was symbolic when Leontes handed to Camillo and asked him, "thou might'st bespice a cup" to poison Polixenes. Spinning Top: It was useful to create tension during Leontes' speeches, though not directly used by Leontes until the end when he plays with it feebly to show that the anger is gone, as is his son. Robe: To show an outward manifestation of Leontes' insomnia. Baby: Leontes tries to stay away from this, and is always as far away as athe stage will allow, this is so he doesn't have to face the truth that the baby IS his, out of sight out of mind. Older Suit: To show that the character has aged, or a passing of time, it's brown too which is associated with age. ...read more.