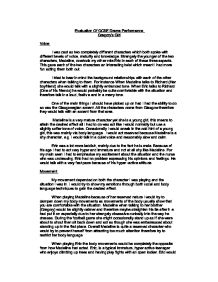 Evaluation Of GCSE Drama Performance Gregory's Girl Voice: I was cast as two completely different characters which both spoke with different levels of voice, maturity and knowledge. Strangely the younger of the two characters, Madeline, overtook my other role Eric in each of these three aspects. This gave each of the two characters an interesting twist which meant I had more fun acting them both out. I tried to bear in mind the background relationships with each of the other characters when talking to them. For instance When Madeline talks to Richard (Her boyfriend) she would talk with a slightly entranced tone. When Eric talks to Richard (One of his friends) he would probably be quite comfortable with the situation and therefore talk in a loud, festive and in a merry tone. One of the main things I should have picked up on had I had the ability to do so was the Glasgowegian accent. All the characters come from Glasgow therefore they would talk with an accent from that area. Madeline is a very mature character yet she is a young girl, this means to attain the desired affect all I had to do was act like I would normally but use a slightly softer tone of voice. Occasionally I would sneak in the odd hint of a young girl, this was mainly via body language. ...read more.

It was also important that the audience reacted to the game in the same way. Even though there was really not much happening on our makeshift pitch we had to react to pretend events(such as a bad tackle). The other scenes didn't really require any timing except delays in responses to show that the character was thinking of what to say. Responses to chosen play: After being given the task of acting out Gregory's Girl I felt reasonably happy yet knew that I was in for a tough ride. I was told but not convinced the play was a comedy, it was only after finishing it that I realised the potential of the rather humorous characters and found out how each one had an unusual yet quite amusing twist. The play looked quite complicated and as unlike some of my group I hadn't seen it yet so it was hard to grasp the overall meaning of the play. To be honest I'm still quite confused over the meaning of the play because it didn't seem to have one. One thing I was sure of was that the play and my group would be one I would enjoy being part of. How I felt about my chosen character: When I was given the characters of Eric and Madeline I knew little about them and therefore had to take the teachers word that they would be the right characters for me. ...read more.

We did manage to make it work by taking the whole shot again. The third scene was also fine as it was not very long. The final scene was probably the weakest because of the amount of lines and the fact that we didn't feel as confident saying them. Either way play as a whole went very well and got us a good mark. Amendments: If I could make any changes I would probably have to spend a lot more time developing the scenery etc. because we only concentrated on the lines and acting. Although his was very important it didn't gain marks in one of the areas whereas more intricately designed scenery would have. More practice on the lights would have also been more useful but I'm grateful for having them in the first place as we were very close to not. The scene transitions were a bit rough, this could have been worked on but it was overlooked and brought down the professional look of the play. In terms of acting we were sound but could of worked further on characterisation. Our group worked very well in all aspects. Not only did we finish learning all the lines, design some reasonably set designs and bring in a few props in a short amount of time, we also delivers a well polished final production which achieved high marks. ...read more.