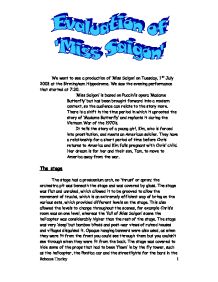 We went to see a production of 'Miss Saigon' on Tuesday, 1st July 2003 at the Birmingham Hippodrome. We saw the evening performance that started at 7:30. 'Miss Saigon' is based on Puccini's opera 'Madame Butterfly' but has been brought forward into a modern context, so the audience can relate to the story more. There is a shift in the time period in which it uprooted the story of 'Madame Butterfly' and replants it during the Vietnam War of the 1970's. It tells the story of a young girl, Kim, who is forced into prostitution, and meets an American soldier. They have a relationship for a short period of time before Chris returns to America and Kim falls pregnant with Chris' child. Her dream is for her and their son, Tam, to move to America away from the war. The stage The stage had a proscenium arch, no 'thrust' or apron; the orchestra pit was beneath the stage and was covered by glass. The stage was flat and unraked, which allowed it to be grooved to allow the movement of trucks, which is an extremely efficient way of bring on the various sets, which provided different levels on the stage. ...read more.

I think lighting was used incredibly well in two particular scenes, the first of which is the red light district, as it was well lit and had a great impact on the audience as they had a lot to look at and it gave them the feeling of being on a real street and seeing all the separate bars. The use of neon lights in this scene created a bright, lively atmosphere, and it was also successful at making the bars seem cheap and tacky. Also the helicopter scene had a great impact on the audience as strobe lighting was used which made things appear as they were in slow motion, but also huge, blinding flood lights were shone out into the audience which created the feeling of actually being in the middle of the action. The sound quality throughout the whole performance was excellent, especially Chris and Kim, this meant that you could hear most things sung and the little dialogue spoken. The play used recitative, where everything is sung and there is very little spoken. In particular the helicopter scene used sound very well as it created the illusion of a real helicopter coming closer as the sound ...read more.

In the bar at the beginning there are the go-go dancers and the GI's in uniform, this shows the difference between the two cultures. Also in this scene Kim is dressed in a traditional Japanese dress, which makes her stand out from the rest of the characters, it also shows that she doesn't really fit in and belong in the bar. In the American dream scene when the car is flown down the dancers are dressed in blonde wigs and sparkling outfits so they resemble Marilyn Monroe who is an icon of the American dream and lifestyle, which they are trying to portray on stage at this point in the play. The costume of Tam, the son of Chris and Kim, in the last scene as Kim desperately wants to get to America and she dresses the boy in typical American dress with a baseball cap which shows she wants Tam to grow up as an American child. Overall, I really enjoyed the production of 'Miss Saigon' as I thought the drama medians were used extremely successfully and created a greater impact on the audience. The lighting and sound were used effectively, and there was a good standard of performance maintained throughout. All these elements worked well together and made the performance very enjoyable to watch. 1 Rebecca Thorley ...read more.