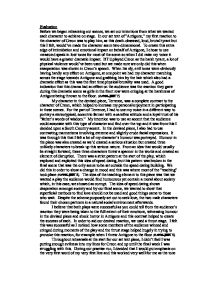 Evaluation of our play version of Antigone.

Evaluation Before we began rehearsing our scenes, we set our intentions from what we wanted each character to achieve on stage. In our set text of "Antigone," my first reaction to the character of Creon was to play him, as this death-obsessed, loud, brutal tyrant but this I felt, would've made the character seem two-dimensional. To create this extra edge of intimidation and emotional impact on behalf of Antigone, I chose to use measured speak in low tones for most of the scene so when I did raise my voice it would have a greater dramatic impact. If I'd played Creon as the harsh tyrant, a lot of physical violence would've been used but we made sure we only did this when exasperation was shown in Creon's speech. When his sly, evil tones were obviously having hardly any effect on Antigone, at one point we had my character marching across the stage towards Antigone and grabbing him by the hair which also had a dramatic effect as this was the first time physical brutality was used. A good indication that this drama had an effect on the audience was the reaction they gave during this dramatic scene as girls in the front row were cringing at the harshness of Antigone being thrown to the floor. ...read more.

The idea of speed dating shows desperation amongst society and by our final scene, we wanted to show that superficial methods to find love should not be used and good things came to those who wait. Despite the scheme purposely set out to seek love, the two male characters found their chosen partners in a natural social environment afterwards. I believe that both plays were successful as you could tell from the audience's reaction they were being taken to the full extent of their emotions, witnessing humour in the devised piece and shock horror in Antigone and this contrast helped to create the success of each. In order to aid our desired reaction, we used a thrust stage. I felt this was successful as I noticed how some members of the audience winced and cringed during moments of the play and the thrust stage helped hugely in trying to provoke this reaction, for example when I threw Antigone to the floor (APPENDIX 9). Throughout rehearsals at the start for our set text piece, I didn't feel I was putting enough evilness into my lines for Creon and up until the final week I was struggling with this. ...read more.

The amount of props we used in each play was minimal as we felt we didn't need excess amount of props to portray our ideas and messages. We used two main props in our set piece text, the throne and the red veil, which were both indications of power and intimidation and that again relates back to my intentions. We did not use any significant props in our devised piece, as we wanted to show our message was simple and did not need much fabrication. Due to the fact we only had a group of three put a lot of pressure on all of us to do well because if one of us had failed to perform, it would be clearly noticeable due to the lack of bodies on stage. Overall, I felt we achieved what we set out to achieve and based on this and the audience reaction, the play was a success. I felt that I've benefited from this unit of work and bettered my acting skills, especially with playing the part of Creon. This work has also helped me develop my writing skills. ...read more.