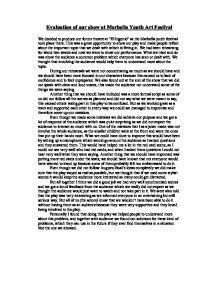 Evaluation of our show at Marbella Youth Art Festival.

Evaluation of our show at Marbella Youth Art Festival We decided to produce our forum theatre at "El Ingenio" as the Marbella youth festival took place there. This was a great opportunity to show our play and make people reflect about the important topic that we dealt with which is fitting in. We had been rehearsing for about two weeks and now we were to show our performance. What we tried and do was show the audience a common problem which everyone has seen or dealt with. We thought that involving the audience would help them to understand more about the topic. During our rehearsals we were not concentrating as much as we should have and we should have been more focused in our characters because this caused us to lack of confidence and to feel unprepared. ...read more.

Even though we made some mistakes we did achieve our purpose and we got a lot of response of the audience which was quite surprising as we did not expect the audience to interact so much with us. One of the mistakes that I as a joker made was not involve the whole audience, as the smaller children were at the front and were the ones that put up their hands most. What we could have done to improve this would have been by setting up a microphone which would go around the audience as I asked questions and they answered them. This would have helped me a lot in the red card scene, as I could not see very well who had red cards, and when I asked them questions I could not hear very well what they were saying. ...read more.

We were also told that the play was very interesting as we informed everyone in an entertaining but still serious way. But all of us (the actors) know that we wouldn't have been able to do it without having them as an audience because they were very supportive and they loved being involved in the play. Personally I found that doing this play we helped people to understand more about this problem, and together with audience we found out solutions for these kind of problems, which they can use in the future if they ever find themselves in a situation like the one we showed. ...read more.