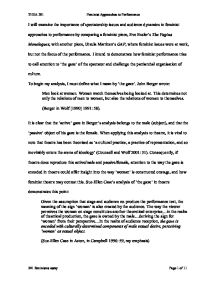 I will examine the importance of spectatorship issues and audience dynamics in feminist approaches to performance by comparing a feminist piece, Eve Ensler's The Vagina Monologues, with another piece, Ursula Martinez's OAP, where feminist issues were at work, but not the focus of the performance. I intend to demonstrate how feminist performance tries to call attention to 'the gaze' of the spectator and challenge the patriarchal organisation of culture. To begin my analysis, I must define what I mean by 'the gaze'. John Berger wrote: Men look at women. Women watch themselves being looked at. This determines not only the relations of men to women, but also the relations of women to themselves. (Berger in Wolf [1990] 1991: 58). It is clear that the 'active' gaze in Berger's analysis belongs to the male (subject), and that the 'passive' object of his gaze is the female. When applying this analysis to theatre, it is vital to note that theatre has been theorised as 'a cultural practice, a practice of representation, and so inevitably enters the arena of ideology' (Counsell and Wolf 2001: 31). Consequently, if theatre does reproduce this active/male and passive/female, attention to the way the gaze is encoded in theatre could offer insight into the way 'woman' is constructed onstage, and how feminist theatre may contest this. Sue-Ellen Case's analysis of 'the gaze' in theatre demonstrates this point: Given the assumption that stage and audience co-produce the performance text, the meaning of the sign 'woman' is also created by the audience. ...read more.

orgasm. As well as being a source of comedy, the different orgasms demonstrated were clearly not of the 'vaginal passivity' that is usually imposed on women: 'A girl must learn several things to properly assume her feminine role. She must give up clitoral masturbation and channel her sexuality towards vaginal passivity.' (Freud in Dolan 1988: 11). Furthermore, the audience was told these orgasms liberated women, which could mean liberation from the passive 'uterine norm' Freud describes in the Dolan quote above. In addition to repressing sexuality in order to 'assume her feminine role', Luce Irigaray argues that women have other cultural roles imposed upon them: Mother, virgin, prostitute: these are the social roles imposed upon women...neither as mother nor as virgin nor as prostitute has woman any right to her own sexual pleasure. (Irigaray in Counsell and Wolf 2001: 63 - 64) Thus, using a lesbian prostitute as a source of liberation from sexual repression may call into question the roles culture imposes on women, because by choosing to be a lesbian (and a prostitute) she too gets (sexual) pleasure from giving other women sexual pleasure, therefore, she creates her own right to it, and is not ashamed of it. Yet, while stating that The Vagina Monologues may provide most viewing pleasure for a spectator competent in decoding the feminist message, analyzing the spectatorship issues 'The Woman Who loved To Make Vaginas Happy' present to a non-feminist spectator is important in order to investigate how feminist performance tries to call attention to 'the gaze'. ...read more.

Yet, this gesture still made a point about the stigmatism associated with old age, as by dressing herself up in young ladies clothes to make herself more attractive to the audience, old Ursula revealed how 'the body...is invested with cultural meaning, its materiality obscured by signs, so that our conception of our bodies reflects and re-enforces the ruling socio-symbolic order' (Grosz in Counsell and Wolf 2001: 140). Therefore, as a not overtly feminist performance, OAP still engaged with feminist issues. By adhering to the dominant ideologies of beauty and age, and then undermining them through Brechtian performance techniques (for example, the demonstration of gender dynamics) OAP made age a feminist issue by allowing age and feminism to intersect, permitting the feminist spectator to engage with the piece. Using Brechtian techniques to unsettle 'the gaze' was a key element in this process, as by undermining the stereotype of an old lady, the performance text helped to shape a different kind of cultural text (Dolan 1988: 2). In conclusion, although OAP was undoubtedly successful at making age a feminist issue, The Vagina Monologues, by virtue of being a hybrid of political demonstration/performance, was ultimately more successful at challenging the patriarchal structures of culture. By creating an audience dynamic of shared solidarity with other women, who were the implied and real spectators of the piece, The Vagina Monologues was searching for political change, and all feminism 'must be defined with a political edge' (Reinalt and Roach 1992: 225). OAP was not seeking political change, but effectively brought to attention the ignominy suffered by its real spectators, particularly the female ones, who were the pensioners Ursula interviewed in Morecambe6. ...read more.