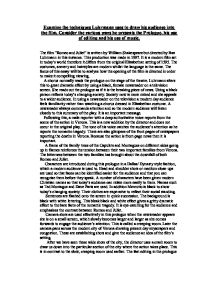 Examine the techniques Luhrmann uses to draw his audience into the film. Consider the various ways he presents the Prologue, his use of editing and his use of music.

Examine the techniques Luhrmann uses to draw his audience into the film. Consider the various ways he presents the Prologue, his use of editing and his use of music. The film "Romeo and Juliet" is written by William Shakespeare but directed by Baz Luhrmann in this instance. This production was made in 1997. It is a modern film set in today's world therefore it differs from the original Elizabethan setting of 1595. The costumes, scenery and hairstyles are modern whilst the language is the same. The focus of this essay will be to analyse how the opening of the film is directed in order to make it compelling viewing. A chorus normally reads the prologue on the stage of the theatre. Luhrmann alters this to great dramatic effect by using a black, female newsreader on a television screen. ...read more.

A frame of the family trees of the Capulets and Montagues on different sides going up in flames reinforces the tension between their two important families from Verona. The bitterness between the two families has brought about the downfall of both Romeo and Juliet. Characters are introduced during this prologue in a Dallas/ Dynasty style fashion, which a modern audience is used to. Head and shoulder shots or medium close-ups are used so that faces can be identified easier for the audience and that you can recognise them before they speak. A number of characters have been given modern Christian names so that today's audience can relate more easily to them. Names such as Ted Montague and Dave Paris are used. In addition Mercutio is black to show today's changing society. Their clothes are expensive to reflect their social standing. ...read more.

The fast editing in the prologue results in quick, snappy, action, which produces excitement and interest for the audience. Whilst the camera passes over the city and zooms down into Verona streets, music plays. The choice of music is appropriate for the nature of the film because it is dramatic, rousing opera music. It is an operatic chorus that replaces the old Elizabethan chorus that would normally read the prologue. Verona is in Italy and opera is the national music. Luhrmann changes the music cleverly as at the start there is no music and afterwards he uses funk music, this appeals to the modern teen audience. It can be seen, then, that Luhrmann uses various methods to draw his audience into the film. These include music, modern setting, fast editing, clever camera work, modern introduction of characters and casting. The use of stars such as Leonardo DiCaprio would draw in a younger audience whereas Shakespeare's story draws in the older audience. Hardeep Sarai 11HA ...read more.