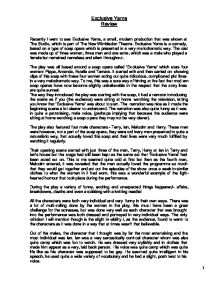 Exclusive Yarns, a small, modern production that was shown at The Studio, which is part of The New Wimbledon Theatre - Review

Exclusive Yarns Review Recently I went to see Exclusive Yarns, a small, modern production that was shown at The Studio, which is part of The New Wimbledon Theatre. Exclusive Yarns is a comedy, based on a type of soap opera which is presented in a very melodramatic way. The cast was made up of three women, three men and one extra, which was a male who played a female but remained nameless and silent throughout. The play was all based around a soap opera called 'Exclusive Yarns' which stars four women- Pippa, Amanda, Estelle and Tamara. It started with and then carried on showing clips of this soap with these four women acting out quite ridiculous, complicated plot lines in a very melodramatic way. To me, this was a sure way of hinting at the fact that modern soap operas have now become slightly unbelievable in the respect that the story lines are quite surreal. The way they introduced the play was starting with the soap, it had a narrator introducing the scene as if you (the audience) were sitting at home watching the television, letting you know that 'Exclusive Yarns' was about to start. The narration was nice as it made the beginning scene a lot clearer to understand. The narration was also quite funny as it was in quite a patronising, male voice, (perhaps implying that because the audience were sitting at home watching a soap opera they may not be very clever). ...read more.

But again, this was also a very life like character. Terry's speech was quite real for a man from London, he was also slightly posh which showed he was not a dumb character. The character I thought was best out of the women was probably Amanda, she started out as a typical 'dumb blonde' character who wore lots of make up, very girly coloured clothing, and failed each time she tried to add up a sum behind the counter in her shop. She spoke in quite a common manor and would cut words short, or even use some 'slang' which showed she was a young character. This part of her character was really funny even though it was just a stereotype. As her character changed into a more over powering character her clothes became smarter, her voice and speech became clearer and more educated and her hair changed from blonde to brown. The character I found the least entertaining out of the females was Tamara, she was quite plain and I found her to be boring to watch. She had a few funny lines that she slipped in but other than that, her character was quite plain and didn't seem to have any characteristics that stood out in any way. She played a woman who was fairly well spoken, this may have been one of the reasons why I didn't find her particularly interesting as her voice was quite boring. ...read more.

There was no other music used to set the scene other than sounds that were used in the soap scenes to create a comic and dramatic feeling. I felt that a bit more music may have made the play a bit easier to watch as some music can often break up long scenes, making them more interesting. The lighting that was used was mainly key lighting which is very naturalistic, some spot lighting on people and just blackouts to separate the soap scenes from the real scenes with the men. In the soap scenes there was slightly softer lighting used, which is used mostly to make people look more flattering and to give the scene a more glamorous look. This is what is done in real life soap operas which again, makes the more even more realistic in that respect. There was a lot of spotlighting used in the soap scenes which gave even more of a dramatic feel. At one point when the stage was being re-arranged in the dark, there was a soft spotlight put on one character whilst he was making a phone call. This was a very clever way of separating the scenes, as there was a monologue going on whilst there were other people moving around on the stage but it wasn't even noticeable as all the audience was focused on the monologue that was being performed. I feel that this play could appeal to a wide range of ages from early teens up to quite elderly people. ...read more.