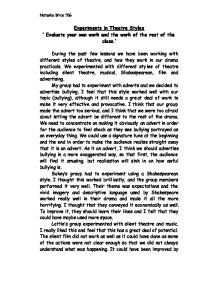 Experiments in Theatre Styles ' Evaluate your own work and the work of the rest of the class.' During the past few lessons we have been working with different styles of theatre, and how they work in our drama practicals. We experimented with different styles of theatre including silent theatre, musical, Shakespearean, film and advertising. My group had to experiment with adverts and we decided to advertise bullying. I feel that this style worked well with our topic (bullying), although it still needs a great deal of work to make it very effective and provocative. I think that our group made the advert too serious, and I think that we were too afraid about letting the advert be different to the rest of the drama. ...read more.

To improve it, they should learn their lines and I felt that they could have maybe used more space. Lottie's group experimented with silent theatre and music. I really liked this and feel that this has a great deal of potential. The silent film did not work as well as it could have done as some of the actions were not clear enough so that we did not always understand what was happening. It could have been improved by using captions on large pieces of paper, so that the audience would be clear as to what was happening. May be some of the movements could have been made clearer by being bigger and exaggerated. I really liked the way they used different styles of walking to justify different characters and friendship groups and I think they could have used more of that. ...read more.

I liked the use of the film as it gave the audience the chance of seeing through the victim's eyes and how awful bullying is. Using the film also set the scene well so you had a very realistic setting. They need to use more stylised movement and move up and down stage more, adding variety and more interest. I like their economical use of costume and the bright orange colour helped add to the fact that she was being bullied because of it and so that Tori stood out more. I really enjoyed experimenting with the different forms of theatre and it has given me a chance to see unusual forms of theatre and how effective they can be. Our group has decided to use a variation to the film style by using sound recording to show thoughts. Natasha Brice 10G ...read more.