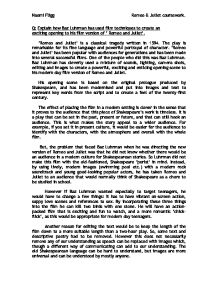 Explain how Baz Luhrman has used film techniques to create an exciting opening to his film version of ' Romeo and Juliet'.

Q: Explain how Baz Luhrman has used film techniques to create an exciting opening to his film version of ' Romeo and Juliet'. 'Romeo and Juliet' is a classical tragedy written in 1594. The play is remarkable for its fine language and powerful portrayal of character. 'Romeo and Juliet' has been popular with audiences for generations and has been made into several successful films. One of the people who did this was Baz Luhrman. Baz Luhrman has cleverly used a mixture of sounds, lighting, camera shots, editing and images to create a powerful, exciting and enticing opening scene to his modern day film version of Romeo and Juliet. His opening scene is based on the original prologue produced by Shakespeare, and has been modernised and put into images and text to represent key words from the script and to create a feel of the twenty-first century. The effect of placing the film in a modern setting is clever in the sense that it proves to the audience that this piece of Shakespeare's work is timeless. It is a play that can be set in the past, present or future, and that can still hook an audience. ...read more.

On the roof, both hold a sign, one saying 'Montague' and the other saying 'Capulet'. These are both a powerful reminder to the citizens of fair Verona about the importance of the two families and the status they uphold. In-between these reminders, stands a statue of Jesus, putting the thought to the audience that only God is powerful enough to put a stop to this ancient grudge of both the houses. Mr. Luhrman has chosen Jesus for this particular image because he is a peaceful figure; it is as if he is watching over the city. These images are flashed in front of us, cutting from one shot to the other and then back again making the scene exciting and busy, keeping the audience interested and wanting more. Baz Luhrman has chosen to view parts of the prologue as text by flashing quotes across the screen in big, capitalised, bold text, with contrasting colours of 'white on black'. This creates a drastic look and keeps the audience in interested, mesmerised and wanting more. Baz Luhrman then continues to bring the prologue into film by taking the key words from a line of the prologue, and finding an image to match each theme. ...read more.

A dramatic, high pitch choir music (choral) is ongoing but as the voice over recites the prologue, it quiets down. Behind every sentence behind the music is building up to a crescendo, leading the audience into the nest part of the scene. The tone of the voice over is deep and strong, but also manly. It is commanding and is telling us it has something very important to say, the seriousness of this sets the tone of the play. From this we see flashes of prologue, each line being shown to us with a crash of drums and with the climax building of the music. It being written on screen, reinforces the whole purpose and meaning of this opening scene. It shows us the original text and again, seeing it written down is easy to see, and so is another try at aiming it at a wider audience. The images are continuously thrown at us, from one to another, sometimes without even giving us a chance to glare, but this is all done for dramatic effect and adds a rush of adrenaline to the film and to the audience building it all up to the climax of fireworks and a final blow from the drums, leaving the audience in suspense. Naomi Fligg Romeo & Juliet coursework. ...read more.