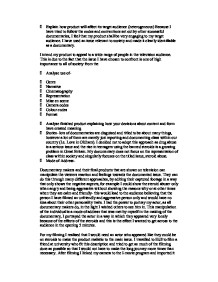 Explain how product will affect its target audience

* Explain how product will affect its target audience (heterogeneous) Because I have tried to follow the codes and conventions set out by other successful documentaries, I feel that my product shall be very engaging to my target audience. I have used an issue relevant to society and made it clearly identifiable as a documentary. I intend my product to appeal to a wide range of people in the television audience. This is due to the fact that the issue I have chosen to confront is one of high importance to all of society from the * Analyse use of- * Genre * Narrative * Cinematography * Representation * Mise en scene * Camera codes * Colour codes * Format * Analyse finished product explaining how your decisions about content and form have created meaning * Stories- lots of documentaries are disguised and titled to be about many things, however a lot of them are merely just reporting and documenting class within our country (I.e. ...read more.

this would lead to the audience believing that the person I have filmed an unfriendly and aggressive person only and would have no idea about their other personality traits. I had the power to portray my actor, as all documentary makers do, in the light I wished others to see him in. This manipulation of the individual is a mode of address that was met by myself in the making of the documentary, I portrayed the actor in a way in which they appeared very lonely because of the effects of the steroids and this is the effect I wanted to get across to the audience in the opening 5 minutes. For my filming I realised that I would need an actor who appeared like they could be on steroids to make the product realistic to the main issue. ...read more.

Also I took some filming at the landmark in hull, the Humber Bridge. This was because I wanted to clearly show where the individual was being filmed and therefore where they were living to give an idea of their background and social status for the audience, therefore making the audience more actively involved in the program. I filmed at the local landmark due realising that other documentaries also tended use footage of where their own documentary issue was taking place. During the opening sequence of other documentaries I also noted that they had lot of what appeared to be irrelevant footage, however this footage was just to set the scene and give the audience an idea of the settings of where the documentary was taking place and therefore filming of random objects, bearing relevance to the steroid abuser were included in the product. ?? ?? ?? ?? ...read more.