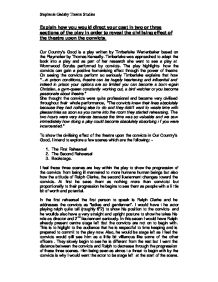 Explain how you would direct your cast in two or three scenes of the play, Our Country's Good, in order to reveal the civilising effect of the theatre upon the convicts

Explain how you would direct your cast in two or three sections of the play in order to reveal the civilising effect of the theatre upon the convicts. Our Country's Good is a play written by Timberlake Wertenbaker based on the Playmaker by Thomas Keneally. Timberlake was approached to adapt the book into a play and as part of her research she went to see a play at Wormwood Scrubs performed by convicts. The play highlights how the convicts can gain a positive humanising effect through the power of theatre On seeing the convicts perform so seriously Timberlake explains that how "...in prison conditions, theatre can be hugely heartening and influential and indeed in prison your options are so limited you can become a born-again Christian, a gym-queen constantly working out, a bird watcher or you become passionate about theatre." She thought the convicts were quite professional and became very civilised throughout their whole performance, "The convicts knew their lines absolutely because they had nothing else to do and they didn't want to waste time with pleasantries as soon as you came into the room they started rehearsing. The two hours were very intense because the time was so valuable and we saw immediately how doing a play could become absolutely absorbing if you were incarcerated." ...read more.

At the close of the scene and after many failed attempt of a successful rehearsal and disruption from the two lietennants Campbell And Ross who take great delight in taunting the convicts and indeed Ralph, the convicts would all be in the positions on stage Ralph had directed them to be in but not holding an appropriate stance or expression all would be lookin toward Ralph expectantly who is now downstage centre. I would the nhave Ralph looks to the floor, sigh and bring his hands up behind his head to show the shambles of the rehearsal. In the second rehearsal, three of the convicts have beein taken away and put in chains . Ralph, Mary Brenham and Robert Sideway are all presnet on stage waiting for the three convicts to be brought in to rehearse. Ralph, Mary and Robert are situated downstage right with Mary and Robert sat on the floor, cross legged with their hands neatly placed on their lap while their faces would be fixed in front of them.. Ralph would be standing next to them watching the door anxiously. His appearance has become somewhat more ruggid. His dark hair is ruffled, he is not cleanly shaven and has the first few buttons of his shirt undone, whereas the two convicts on stage have better posture and look more clean and a little more groomed. ...read more.

Their gestures would be very purposeful as they are getting ready and preparing to go on stage . They are thouroughly serious now and nervous about their performance. Sideway addresses the group in a slightyl worried tone about how they have not prepared their bow but then his tone changesto encouraging an direct about how it should be done. Near the end of this scene moments before they go on stage Ralph will gather them and give them an encouraging talk . He would talk to them as if they are completely on his level now with a small anticipating smile on his face which becomes wider and bigger with him saying "your on". Arscott would slowyl walk downstage centre with his head raised and would take a deep breath before he got into position then begin his first speech. As he finished the lights would slowly dim and beethoven's Fifthe symphony would bouild up as all the actors would join the actor playing Arscott Downstage centre for their bows. I feel that these three scenes really higlight the civilising effect of the theatre upon the convicts and Ralph Clarke also. They show the developing relationship between the convicts and Ralph but also the growth of the convicts into actors. Stephanie Gadsby Theatre Studies ...read more.