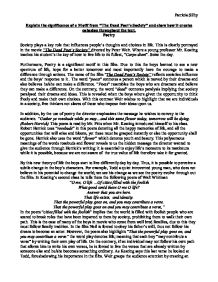 Explain the significance of a Motif from &quot;The Dead Poet's Society&quot; and show how it creates cohesion throughout the text.

Explain the significance of a Motif from "The Dead Poet's Society" and show how it creates cohesion throughout the text. Poetry Society plays a key role that influences people's thoughts and choices in life. This is clearly portrayed in the movie "The Dead Poet's Society" directed by Peter Weir. Where a young professor Mr. Keating teaches his student's the key of how to live life to its fullest, "Carpe diem". Seize the day. Furthermore, Poetry is a significant motif in this film. Due to this the boys learned to see a new spectrum of life, hope for a better tomorrow and most importantly have the courage to make a difference through actions. The name of the film "The Dead Poet's Society" reflects societies influence and the boys' response to it . The word "poets" connotes a person which is moved by their dreams and also believes he/she can make a difference. "Poets" resembles the boys who are dreamers and believe they can make a difference. On the contrary, the word "dead" connotes paralysis implying that society paralysed their dreams and ideas. This is revealed when the boys where given the opportunity to think freely and make their own choices. ...read more.

This is the case of many of the boys in movie who come from well bred families, due to this they must follow family tradition. In the film Neil is forced to obey his father's will, thus not follow his dream to become an actor. However, the poem also highlights "That the powerful play goes on, and you may contribute a verse" the word play denotes life; meaning that each boy "may contribute a verse" by writing their own play of life. On the contrary, if an individual may not follow his own path that allows him to write his own verses, he is forced to live the verses that are already written by someone else and he/she becomes something ordinary. As Keating says this last verse he looked at Todd, foreshadowing his importance in the film. Weir grasps the audience attention by creating an empathy with the character Todd. At this stage the audience feels motivated by the idea of adding a verse to their own life, stressing the importance of following their own path and making their own decisions. Weir also uses irony in this part of the film because he wants the audience to reflect on their own course in life; suggesting that they might also be manipulated by following the role society has set on the audience.. ...read more.

Keating innocence. This was shown when all the boys stood up on theirs desks; showing that they are able to stand up for something they believe in. Weir communicates a specific message to the audience through Neil at the end of his speech as Puck in A Midsummer Night's Dream. "...That you have but slumbered here While these visions did appear And this weak and idle theme No more yielding than a dream..." Weir with the word "slumber" denotes sleep and paralysis, suggesting that if you have ignored all these teaching taught by the movie, you are paralysing your own reality since you can not accept to be different. Shakespeare writes this with an ironic tone to grasp the audience attention. Shakespeare like Weir want the audience to read this extract in a dominant reading position allowing them to absorb the message conveyed in the film: make a difference in society. "Carpe diem" In conclusion, life and passion in the boys was inspired by poetry. Without poetry the message would not make such an effect on the audience. The language of the poems is the inspiration for many of the boys. Creating a change in them, this allows them to think objectively for themselves. As Robert Frost says "Two roads diverged in the woods and I, I took the one less travelled by and that has made all the difference" Patricia Silhy ...read more.