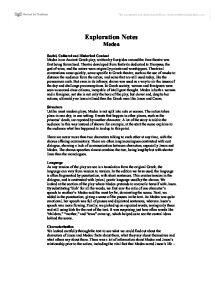 Exploration Notes Medea Social, Cultural and Historical Context Medea is an Ancient Greek play, written by Euripides around the time theatre was first being formalised. Theatre developed from festivals dedicated to Dionysus, the god of wine, and the actors were originally priests and worshippers. Theatrical conventions arose quickly, some specific to Greek theatre, such as the use of masks to distance the audience from the action, and some that are still used today, like the proscenium arch. But even in its infancy, drama was used as a way to air the issues of the day and challenge preconceptions. In Greek society, women and foreigners were seen as second-class citizens, incapable of intelligent thought. Medea is both a woman and a foreigner, yet she is not only the hero of the play, but clever and, despite her actions, ultimately no less civilised than the Greek men like Jason and Creon. Structure Unlike most modern plays, Medea is not split into acts or scenes. The action takes place in one day, in one setting. Events that happen in other places, such as the princess' death, are reported by another character. A lot of the story is told to the audience in this way instead of shown: for example, at the start the nurse explains to the audience what has happened to lead up to this point. ...read more.

I thought that Medea should be confident physically, making decisive, controlled movements. I also thought that in this scene in particular, Medea's voice had to be strong to show her defiance. When we started rehearsing, Jason was angry, but as we went on he became more patronising. This had the unintended effect of making me as Medea more frustrated, losing the control of the scene and giving Jason the upper hand. Interestingly, when we thought about the characters' objectives and found an action to go with that, we found they had similar aims, and our scene became more confrontational. When another pair performed the scene where Medea pretends to reconcile herself to Jason, they brought out different aspects of the characters. Medea was softer, and possibly more troubled, and Jason was more caring, seeming to genuinely look forward to his sons' future. I thought this portrayal would make the audience more ambivalent about whether Medea is justified in her revenge. Staging We all developed our own design concept for Medea, and the range of different ideas showed how versatile the play is. I think this is because it would be difficult to stage it in the original Greek way because elements such as the masks are unfamiliar to a modern audience. ...read more.

Our chorus was used as her conscience, shying away from her in horror at first and then berating her without any sympathy once she had killed the children. The other group interpreted the scene very differently, with Medea very cold and calculating, almost dehumanised, taking inspiration from the line "she's made of stone." This changed the whole feel of the scene - in our version, it was much easier to sympathise with Medea; the other version was potentially more unsettling as Medea was without remorse even though what she was doing was horrible. Relevance to a Modern Audience Although it was written in a very different society to ours, Medea still remains relevant. The trigger for the events of the play is Jason leaving Medea. We took this situation and put it into a modern context, improvising a scene where a man left his long-term girlfriend. We found that we repeated ourselves a lot, and it was difficult to think of what to say. By taking away the formal language and setting of the play, it made it easier to understand what the characters had gone through. It also showed how the essential themes of the play like relationships, passion and betrayal are universal and will always be relevant. ...read more.