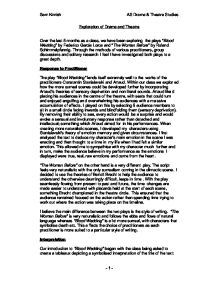 Exploration of Drama &amp; Theatre Within Blood Wedding &amp; The Woman Before

Exploration of Drama and Theatre Over the last 5 months as a class, we have been exploring the plays "Blood Wedding" by Federico Garcia Lorca and "The Woman Before" by Roland Schimmelpfennig. Through the methods of various practitioners, group discussions and solitary research I feel I have investigated both plays to a great depth. Response to Practitioner The play "Blood Wedding" lends itself extremely well to the works of the practitioners Constantin Stanislavski and Artaud. Within our class we explored how the more surreal scenes could be developed further by incorporating Artaud's theories of sensory deprivation and non literal sounds. Artaud liked placing his audiences in the centre of the theatre, with seats that could turn and enjoyed engulfing and overwhelming his audiences with a massive accumulation of effects. I played on this by selecting 5 audience members to sit in a small circle facing inwards and blindfolding them (sensory deprivation). By removing their ability to see, every action would be a surprise and would evoke a sensual and involuntary response rather than detached and intellectual; something which Artaud aimed for in his performances. When creating more naturalistic scenes, I developed my characters using Stanislavski's theory of emotion memory and given circumstances. I first analysed the text to deduce my character's main emotion in the scene I was enacting and then thought to a time in my life when I had felt a similar emotion. This allowed me to sympathise with my character much further and in turn, make the audience believe in my performance as the emotions I displayed were true, real, raw emotions and came from the heart. "The Woman Before" on the other hand is a very different play. The script feels very naturalistic with the only surrealism coming in the climactic scene. I decided to use the theories of Bertolt Brecht to help the audience to understand the otherwise dauntingly difficult, leaps in time. ...read more.

When designing my set for my performances, I remembered to keep this in mind and in turn made sure that all climactic moments were highlighted with a red light. I decided to use a standard proscenium arch stage with raked seating in all but one of my performances in which I sat five blindfolded audience members in a small circle facing inwards with the rest of the audience members seated in rows facing the stage. I think this increased the voyeuristic feel for those watching as they could not only see the action but also see the reactions of the blindfolded audience members. For the five with hindered sight, they had to rely on what they could hear and feel alone, thus making our vocal performances even more important. We incorporated non literal sounds to compliment the sensory deprivation, two Artaudian theories, whilst also reading segments from one of Artaud's poems that complimented the text of "Blood Wedding". We also looked at ways in which we could deliver our lines, experimenting with such techniques as canon, chanting and repetition. We settled on the Use of chanting as it had quite a daunting effect on the audience when combined with the lack of emotion displayed in our faces. In one "The Woman Before" workshop, we were challenged with the task of creating the final scene using only our voice as the audience would have their eyes closed throughout the performance. To start the scene, I began by opening the stage curtains, this worked on two levels as it is a sound associated with the beginning of a play whilst at the same time, it also worked at the first sound heard in the scene: the drawing of shower curtains. As the action in the scene picked up, so do the pace of our breathing. Our breath not only quickened but deepened, creating a sense of fear in the audience as we closed in on them slowly. ...read more.

Vocal Awareness Within a small group, we were given the task of analysing a small section of the lullaby in "Blood Wedding" and investigate how we create the greatest effect from the section we had been given. Throughout the course of the workshop, we experimented with a variety of vocal techniques, one such being canon. With four lines to recite and four members in our group, this seemed like the natural option and worked with great effect. Canon is primarily associated with children's playground songs ("London's Burning" etc.) and therefore we used high-pitched squeaky voices for the first part of the performance. This was then countered by the gruff, monotonous slur of the lines repeated simultaneously. The juxtaposition of tones resulted in quite a haunting effect with what appeared at first like something as pure as a nursery rhyme ("Wedding") ruined by the groans of the repeated lines ("Blood"). This therefore kept in line with our interpretation of the play as something pure being tarnished by something unholy. With "The Woman Before", I experimented with how the tone of my voice could help to convey a sense of panic to the audience. As the character Andi realises that he may have murdered an innocent woman, fear, worry and ultimately panic begin to settle in and my challenge was to let these audience understand the emotions I was feeling in a non explicit way. I began by trialling different volumes and found that the more panicked I became, the louder I got until I was almost barking out explanations. I also found that by contrasting the loud shouts with a softer, higher pitched voice helped to show Andi's innocence and youth and his fear of retribution. Overall, I preferred working with "The Woman Before" as there was a wider variety of emotions that each character could display through their voice alone. ?? ?? ?? ?? Sam Kimish AS Drama & Theatre Studies - 1 - ...read more.