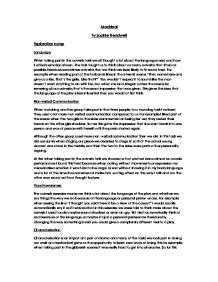 When taking part in the adverb task we all thought a lot about the language used and how it effects emotion shown. The task taught us to think about as many adverbs that fitted as possible because sometimes adverbs that we think are least likely to fit sound best. For example when reading part of the husbands lines in the intermit scene “Then come here and give us a kiss. That’s the girlie. Like that?”  You wouldn’t expect it to sound like the man doesn’t want anything to do with her, but when me and Megan acted the scene by reversing all our adverbs that’s the exact impression that was given. This gives the idea that the language of the play is less influential then you would at first think.

When watching another group take part in the three people to a monolog task I noticed they used a lot more non verbal communication compared to us. For example I liked part of the scene when the two girls to the sides commented on being tiered; they rested their heads on the other girls shoulder. To me this gave the impression that she went back into one person and was at peace with herself until the panic started again.

Although the other group used more non-verbal communication then we did in this task we did use some when staging our piece we decided to stage in so that the actual young women was stood in the middle and then the two to the sides were parts of her personality arguing.

At first when taking part in the adverb task we showed what we had done almost as a radio performance I found this hard because when acting without movements or expression my voice lacked emotion it was hard to be angry or sad without showing it in my body language and a lot of the time the movements I make have a big effect on the way I talk and not the other way round as I had thought before.

The adverb exercise made me think a lot about the language of the play and whether we say things the way we do because of the language or personal preferences. For example when seeing the line “I thought you said there’d be a view of the ocean!” I would usually automatically say it as if I was sad but in this exercise we were told to think more about the adverb I used I could maybe sound shocked or even angry. But did I automatically think of sad because of the language or maybe it’s just a personal preference therefore by changing the way something is said you could give a completely different feel to a play.

Characterisation is an important part of drama and many of the tasks we took part in during our work on mechanical gave us the opportunity to learn new ways of doing this for example when taking part in the gibberish scenes it was really hard to get into character. So for this scene I found it useful and more important to empathise with the character and imagine the set than I usually would.

There is a lot of historical context in Machinal because in 1927 Sophie Treadwell attended the trial of Ruth Snider and her lover and it seems that the trial became a big influence on Machinal.

The play was also written in the middle of a feminist movement this means that most male characters where perused in a bad light within both the way Sophie wrote the play and how it was acted by my class in our improvisation of a proposal task.

When doing the actor audience relationship task I learnt a lot about special elements because I had never thought about how the position and shape of a performing area can change this relationship. Our group tried to act the court scene in the round and discovered that by putting the young women in the centre the audients is constantly reminded that she’s the main character even though she doesn’t have many lines. From this task I began to think about how I would stage the play my favourite idea was to set it as a promenade with a different staging set up in each arrear

When doing the three people to a monolog task we decided to split our group into three different interpretations of the young women showing more clearly how she could be seen, I think this gave a good effect allowing people to see the young women’s schizophrenia more clearly.

The other group that took part in this task staged and acted it in a very different way, there scene had a lot more movement and more of a Brecterian feel to it.

Response to a practitioner

One of the groups attempted to do a promenade peace as part of our actor audience relationship task but because our studio wasn’t big enough we ended up sat at tables turning to hear what the people at each table were saying. I felt like this was more of a Jerzy Grotowski piece because I felt like I wasn’t meant to be listening. This was a very new experience for me and I really enjoyed it I thought it worked very well and seemed more realistic then the procinier march set up of which I am more accustomed to.