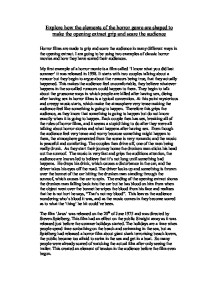 Explore how the elements of the horror genre are shaped to make the opening extract grip and scare the audience Horror films are made to grip and scare the audience in many different ways in the opening extract. I am going to be using two examples of classic horror movies and how they have scared their audiences. My first example of a horror movie is a film called 'I know what you did last summer' it was released in 1998. It starts with two couples talking about a rumour but they begin to argue about the rumours being true, that they actually happened. This makes the audience feel uncomfortable, they believe whatever happens in the so-called rumours could happen to them. They begin to talk about the gruesome ways in which people are killed after having s*x, dieing after having s*x in horror films is a typical convention. At this point mysterious and creepy music starts, which make the atmosphere very tense making the audience feel like something is going to happen. ...read more.

The holidays are a time when people spend time sunbathing on the beach and swimming in the sea, but as Spielberg had released a horror film about giant shark terrorising beach lovers, the public became too afraid to swim in the sea and get in a boat. So many people were already scared of watching the actual film after only seeing the trailer. This created an element of tension in the audience before the film even begun. In the film, the beginning shows the camera looking through something's eyes moving through the sea, and the music is very strange and chilling. This is the first time that the audience is introduced to the music. It is building up suspense, as you can't see what is moving through the water. There is then a sudden change of atmosphere as the audience is shown the friendly environment of a group of young adults sitting around a campfire singing, playing instruments and socializing. We then see a man and a woman flirting with each other they run off together for a midnight swim. ...read more.

Once the water settles there is complete silence, this creating an effect of normality once again as if nothing had happened. There are so many different emotions being generated from the audience during this opening sequence, there is a state of tranquillity then the sudden change to a ferocious attack. The audience may be scared but they enjoy it. This is the way in which Spielberg grips the audience, to a point when the audience doesn't know when the situation is safe or dangerous. The sudden change from peace and normality to then disaster is very quick and I think that along with the other factors that were mentioned, the audience are genuinely scared by the opening extract of the film. As you can see from the two examples above many techniques have been used to grip and scare the audience, it comes down do the use of music, suspense and the point that the audience know that something is going to happen but the actors in the movie do not. The one thing that gets the audience sitting on the edge of their seats is the way in which the director and scares the audience when they least expect it creating more of a tense atmosphere. ...read more.