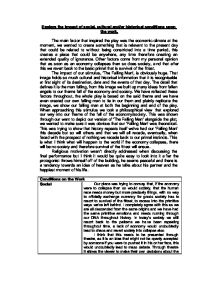 Explore the impact of social, cultural and/or historical conditions upon the work.

Explore the impact of social, cultural and/or historical conditions upon the work. The main factor that inspired the play was the economic climate at the moment, we wanted to create something that is relevant to the present day that could be related to without being constricted into a time period, this creates a piece that could be anywhere, any time therefore creating an extended quality of ignorance. Other factors come from my personal opinion that as soon as an economy collapses then so does society, and that after this we revert back to the basic primal that is survival of the fittest. The impact of our stimulus, 'The Falling Man', is obviously huge. That image holds so much cultural and historical information that it is recognisable at first sight of its destination, date and the events of that day. The detail that defines it is the man falling, from this image we built up many ideas from fallen angels to our theme fall of the economy and society. We have reflected these factors throughout, the whole play is based on the said theme and we have even created our own falling man to tie in our them and plainly replicate the image, we show our falling man at both the beginning and end of the play. ...read more.

Conditions on the Work Social Our piece was trying to convey that, if the economy were to collapse then so would society, that the human race needs money but more precisely things, with no way to officially exchange currency for goods society has to resort to survival of the fittest, to recess into the primitive ways we've left behind. I completely agree with this as we are all descended from the same origins and we have had the same primitive emotions and needs running through our DNA throughout history. In today's society we still resort back to the patterns we have been repeating throughout time, a lack of economy would undoubtedly lead to chaos and revert society into collapse also. I think that this needs to be presented through theatre, as it is an idea that might not be openly accepted by someone if you were to pushed it in his or her face, this would undoubtedly lead to mass debate. Through theatre it allows the viewer to make their own decisions about the themes and ideas and not feel pressured into deciding whether this would happen or not, it is merely a 'what if...?' ...read more.

Talking to members of the audience younger members weren't particularly sure what it was about, where the elder members had a clearer view of it's plot and meaning. From one member I was told that it was "Extremely innovative, shocking and I couldn't get out of my head all week." So I think it widely liked although the younger members had to be told the plot before the started understanding it at all. I think theatre is an outlet to express who you are, show the extraordinary but I also think that, even though there is amazing talent and pieces of theatre being made there's a lot that doesn't reach par but is somehow being accepted for works of genius. This shows the controversial side of it all, what should be construed as works of art are often undervalued and not recognised when they should be. Historical Historical events such as the Wall Street Crash entered into our play, just to provide research and insight into society when it happened. Our piece was a hypothetical representation of the future without an economy. We took from a few practitioners such as Bertolt Brecht using political and didactic content, Artaud using shocking and animalistic content and Stanislavski exploring various ideas surrounding Naturalism. ...read more.