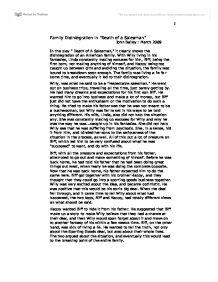 Family Disintegration in Death of a Salesman

Family Disintegration in "Death of a Salesman" John Bailey : March 2009 In the play " Death of A Salesman," it clearly shows the disintegration of an American family. With w***y living in his fantasies, Linda constantly making excuses for him, Biff, being the first born, not making anything of himself, and Happy being too caught up between girls and avoiding the situation, the family was bound to breakdown soon enough. The family was living a lie for some time, and eventually it led to their disintegration. w***y, was what he said to be a "respectable salesman." He went out on business trips, travelling all the time, just barely getting by. He had many dreams and expectations for his first son Biff. He wanted him to go into business and make a lot of money, but Biff just did not have the enthusiasm or the motivation to do such a thing. He tried to make his father see that he was not meant to be a businessman, but w***y was far to set in his ways to be told anything different. ...read more.

When the deal fell through, and it came time to tell w***y about what had happened, the two boys, Biff and Happy, had totally different views on what should be said. Happy wanted Biff to hide it from his father. He suggested that Biff make up a story to make w***y believe that they had a chance at their deal, and then w***y would soon forget about it and move on to another fantasy of his within a few weeks time. Biff, on the other hand, was sick of living a lie. He wanted to tell the truth, not only about the Sporting Goods deal, but also about their whole lives. The two argued about the situation, and eventually this would lead to the breaking point of the entire family. After the restaurant, when everyone was back at home, Linda was furious about the boys leaving their father alone at the restaurant. Happy was still trying to mend the truth that Biff had told, back into a lie, that would satisfy his father's fantasy. ...read more.

All of their lies, dreams and deceptions had finally caught up to them, and there was nothing they could do to work out the situation now. When all was said and done, Biff, Happy and Linda all went up to bed, leaving w***y downstairs by himself. w***y, instead, proceeded to go outside, get into his car, and kill himself in a car crash. It was the end to the Loman family. The Loman family was a family that showed when things get too carried away, and are not fixed; it will eventually lead to a family downfall. It is impossible to make it as a family, when everyone is living a lie. The Loman family proves this because in the end, everyone had lost, nothing was solved, and they were left with less than what they had started with. None of them would change, and if they could have all just accepted that their lives were they way that they were, and always would be, than maybe they could have won their own battle they created. Eventually though, it all becomes too late. This happens all to often in families that are living amongst lies and it will soon lead to the disintegration of a family. 959 words 1 ...read more.